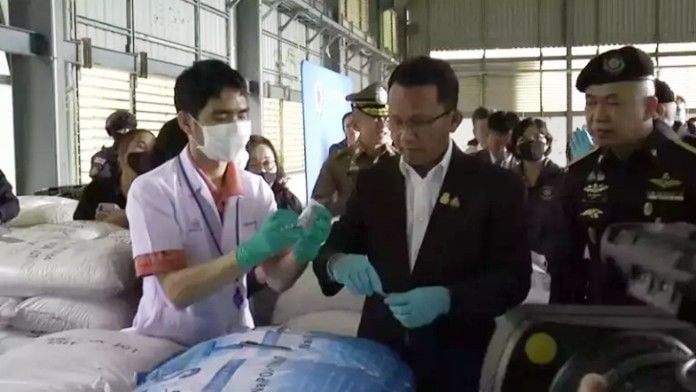 Whoops. After claiming that ketamine was seized in what Thailand’s Narcotics Control Board says is the biggest drug bust on record, the board is now saying the initial 60 bags that were tested, contained only chemical cleaning agents. Last week’s bust at a Chachoengsao warehouse made international headlines as officials reportedly found 11.5 tonnes of the illegal drug. Special K indeed!

Now, in an about face, the board has embarrassingly admitted that the supposed ketamine was actually trisodium phosphate (TSP), a “cleaner, builder, lubricant, food additive, stain remover, and degreaser” that is commonly used in food and pharmaceutical industries. There was a large TSP label on the bags on display as the Thai police paraded their “evidence”.

However, the chemicals found in those bags had been known to be commonly used to hide and help smuggle such illegal drugs across international borders. Such as authorities began investigating the warehouse after receiving notification from Taiwanese authorites that a ketamine shipment was received from Thailand, weighing 300 kilograms.

It is not clear how the bags’ ingredients initially tested positive for ketamine, yet upon further analysis, there was no traces found. Authorities point to a reagent test that was used first, in which the product will turn purple if ketamine is detected. This doesn’t mean, however, that all the bags are ketamine free. The deputy secretary-general, Wichai Chaimongkol, reaffirmed this by indicating that there were still 415 sacks that have yet to be examined.

“However, it is not possible to confirm at the moment if the amount of Ketamine will be discovered after completing the examination since all of the bags might be used to disguise and deceive officials when smuggling Ketamine that might have been already smuggled to Taiwan, as their authorities had alerted us on September.”

Wichai also said that legal proceedings could be taken against the drug dealers in the Kingdom upon their arrests since the case has already happened internationally. He says the ONCB will file a criminal report to the Bureau of Narcotics for further investigation.