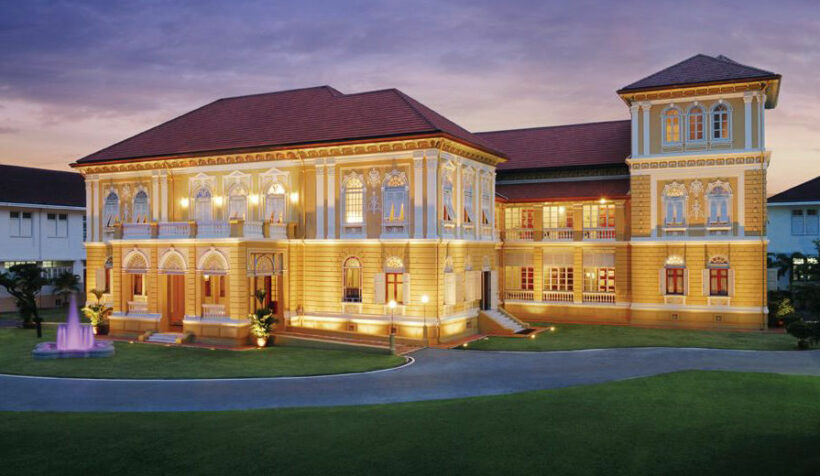 Tomorrow the protest road show moves to the Crown Property Bureau, taking aim directly at the the management of the Thai monarch’s affairs. Protesters, who first brought up the issue of the role of the Thai Monarchy in July this year, say they have “a big surprise” in store. This will be the first time when the entire focus of the protest will be Thailand’s Head of State, previously considered a taboo topic in Thai society and the media.

The Crown Property Bureau is the quasi-government agency responsible for managing the property of the Monarchy of Thailand. The bureau is legally defined as a juristic person and not a government agency. It has no tax obligations – Wikipedia

In speeches during last week’s protests, speakers at the rally said… “we demand the return of taxpayers’ money”.

The Free Youth group posted on their Facebook page… “See you at the Crown Property Bureau on November 25! There will be no compromise.”

“Why they want to get close to the Crown Property Bureau? I think you know their purpose, so there’s no use asking me.”

The Metropolitan Police are warning that the Crown Property Bureau is “royal ground” and considered off-limits for protests “according to the Public Assembly Act”. The law prohibits public assembly within a 150 metre radius of royal buildings.

Tomorrow’s protest also comes less than a week after the PM vowed to enforce “all laws” against the protesters, including the controversial lèse majesté laws. Back in June the PM said that he had been asked by His Majesty to limit the application of Thailand’s lèse majesté laws.

Back in July a 10 point manifesto was read out in a large public forum by protesters for the first time. The calling for the PM to resign, amendments to the Constitution, and dissolution of the government along with a new election, were considered a ‘staple’ for anti-government protesters. But it was the final demands, for tighter controls over the revered Thai Monarchy and reforms to the role of the country’s Head of State, that attracted attention, shocking the ‘establishment’.

The manifesto called for the annulment of the 2018 Royal Assets Structuring Act passed by the NCPO, the military Junta who overthrew the elected Yingluck Shinawatra government. The act combines His Majesty the King’s personal assets and the crown’s wealth managed by the Crown Property Bureau.

On November 18, shortly after the protesters announced their plan for Wednesday, former Army chief and ardent royalist, General Apirat Kongsompong, was appointed Crown Property Bureau deputy director. He was directly appointed by HM the King. He retired from the Army at the end of September.

The Crown Property Bureau was established under the Royal Assets Structuring Act of 1936 and became a legal entity in 1948. It replaced the Royal Treasury that existed up until the 1932 Siamese Revolution, which brought an end to absolute monarchy.

In the early 1900s, the Royal Treasury owned as much as one-fifth of the land in Bangkok, including the key business districts of Si Phraya, Bang Rak and Sampheng, according to a 2006 research paper published by the Sukhothai Thammathirat Open University’s School of Economics.

It also set up Siam Commercial Bank and Siam Cement, which have grown to become two of Thailand’s largest companies.

The Bangkok Criminal Court sentenced a former public official to more than 4 decades in prison for violating the country’s strict lèse majesté law on insulting or defaming the Thai Monarchy.

The woman, a former Revenue Department official known as Anchan, was found guilty on 29 counts of violating Section 112 of the Criminal Code, known as the lèse majesté law, as well as the Computer Crime Act. She was sentenced to 43 years and 6 months in prison.

Anchan had posted audio clips on Facebook and YouTube of a man making comments considered critical of the Thai Monarchy. The man has been arrested, but officials haven’t released any other details.

The ruling comes during an ongoing pro-democracy movement raising subjects that are considered taboo in Thai society. In recent months, dozens of protesters have been charged with violating the lèse majesté law. A senior researcher from the Human Rights Watch as the recent sentence sends a “spine-chilling” message.

“Today’s court verdict is shocking and sends a spine-chilling signal that not only criticisms of the monarchy won’t be tolerated, but they will also be severely punished.”

Section 112 of the Criminal Code:

Those who defame, insult or threaten the King, the Queen, the Heir-apparent or the Regent shall be punished by a jail term of between three to 15 years.