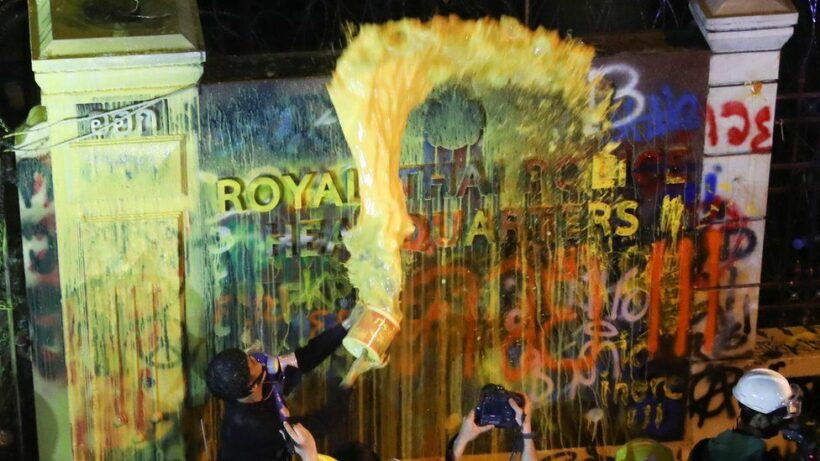 Thai PM Prayut Chan-o-cha is thanking pro-government volunteers for their efforts in helping clean up graffiti and paint after last Wednesday’s massive anti-government protest in central Bangkok around the Ratchaprasong intersection.  The People’s Movement rally was held that day from 4pm, near the police HQ, with a protest co-leader saying they had acted out of anger after police used water cannons and tear gas to stop the protesters from coming near Parliament, after senators rejected a bill that would help move forward a rewrite of the charter.
The day of the protest was also the day that Parliament was voting on 7 versions of the constitutional amendment bill with the charter rewrite being an essential demand of the People’s Movement.  Anucha Burapachaisri, a government spokesman, says the prime minister “hoped that demonstrators would exercise their rights within the framework of the law and express their views in a constructive manner. “
However, after the protest, it was clear that cleanup was needed as National police chief Suwat Jangyodsul organised a cleaning activity at the Royal Thai Police headquarters with 827 police officers taking part in the clearing of graffiti. So far, police are reportedly investigating the people responsible for the damages caused during the protests.
Such use of water cannons and bullets have caught worldwide attention from human rights groups, with the Human Rights Watch issuing a letter in response to the controversial protests. However, it did not stop PM Prayut from reaffirming his position against those who defame the monarchy as he recently said he wouldn’t rule out lèse majesté charges against those who publicly criticised the royal family.
Such criticisms of the monarchy have, until now, been strictly off limits.  But as rallies in the capital are heating up, protesters have been seen turning their backs on the royal motorcade while displaying the 3 finger salute that was adopted by anti-government protesters.