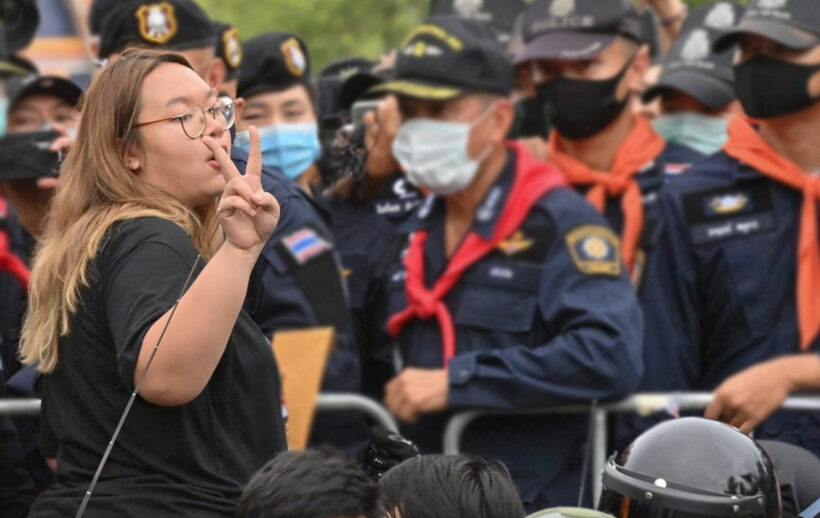 A lèse-majesté complaint has been officially filed against Panusaya “Rung” Sithijirawattanakul, one of the leaders of the Ratsadon ‘People’s Movement’. She was the first to read the, now infamous, 10 point manifesto at the Thammasat University in April, and then in a more public forum at a Democracy Monument protest in early August.

Nitipong Hornak, a songwriter and judge on Thailand’s Got Talent. He’s also a founder and major shareholder of GMM Grammy Entertainment, is behind the complaint. It was presented to the police Technology Crime Suppression Division on Friday afternoon.

Ms Panusaya has been present and active in almost all of the main protests, and been arrested twice. She is currently out on bail.

It hasn’t been disclosed which incident Mr Nitipong has cited in his official complaint. But Ms Panusaya was the first person to publicly read out the 10-point manifesto of a Thammasat University group calling for reform of the monarchy at the university in April.

The prime minister threatened protesters with “the full force of the law, including the lèse-majesté law – Section 112 of the Criminal Code. Back in June, the PM announced that HM the King had expressed his desire for the Government not to use the law against the Thai people.

“His Majesty the King does not want to use Thailand’s strict lèse-majesté laws, which make it a crime to insult or criticise the royal family, but Thai PM Prayut Chan-o-cha says people should still be careful what they say about the Thai monarchy.”

The Thai Government has routinely used the newer Computer Crimes Act, and the national security law for charges such as sedition, which carries jail terms up to seven years. Up until August this year any criticism or commentary about the Thai monarchy were extremely unusual, if not taboo in polite Thai society. The current round of protests are unique in their open discussion, and criticism, of the Thai Monarchy. They are demanding that the role of the Thai Monarch be covered under a revised Thai constitution.