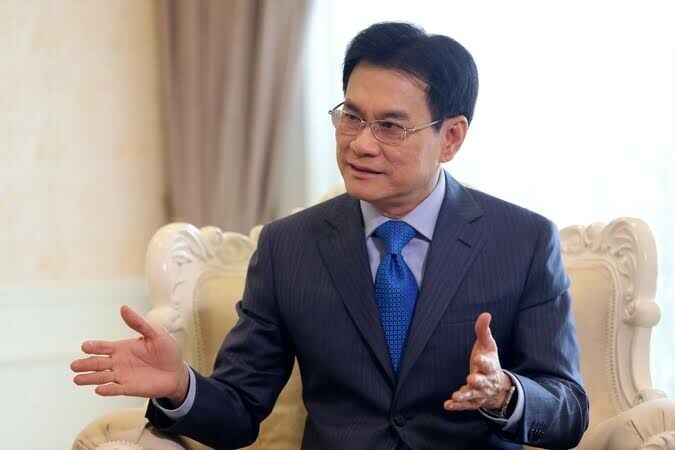 Thailand’s Democrat party leader has publicly apologised and accepted responsibly for the high-profile sex scandal of Prinn Panitchpakdi, who stepped down last week as the party’s deputy leader, as a wave of sexual abuse and rape allegations mount against him.

Speaking at a press conference at party headquarters in Bangkok on Monday, commerce minister Jurin Laksanawisit apologised on the party’s behalf, saying he was “deeply sorry” for the alleged actions of his former colleague Prinn.

“As the Democrat party’s leader, I am deeply sorry. And I take this opportunity to apologise for everything that has happened concerning one of the party’s personnel.”

Moreover, Jurin repeated the party line to not defend the disgraced former deputy leader or stymie the judicial system. He also emphasised the party’s opposition to sexual harassment, as well as gender discrimination and violence against women and children.

To prove that he took the matter seriously and accepted responsibly, Jurin said he had removed himself from the government committees for women’s policies and gender equality, in a display of self-chastisement.

“As the party’s leader, I played important roles in recruiting Mr Prinn… Because the issue arose while I was the party leader, I can’t avoid responsibility.”

The party has formed a committee to investigate the allegations pressed against Prinn and seek ways to help any confirmed victims, according to the Bangkok Post.

Prinn is the son of former deputy PM Supachai Panitchpakdi. His father was also the former secretary-general of the UN Conference on Trade and Development, as well as the former director-general of the World Trade Organisation.

Benroon
7 hours ago, Bluesofa said: I would have thought he might resolved to stay on the committees, or me being cynical is it a publicity stunt to appear genuinely concerned? Not sure what removing him will gain ?…

Bluesofa
3 minutes ago, Benroon said: Is it beyond the realms of possibility that they ARE genuinely concerned ? Unlike at least two posters on here, not everything treats rape lightly. The point i was making was I couldn't follow why…
Fanta
1 minute ago, Benroon said: You seriously think that anyone in office in Thailand are worried about the metoo movement ? Remember this is a government whose second in command 'borrowed' millions of baht of watches from a dead person…

Benroon
25 minutes ago, Fanta said: Over 50% of the adult population are female and rape is an understandably universally sensitive issue for all women. Only a political fool would risk getting that many voters off side. Guilty or not, Mr Rapey Rapey…

Benroon
48 minutes ago, Bluesofa said: The point i was making was I couldn't follow why " Jurin said he had removed himself from the government committees for women’s policies and gender equality, in a display of self-chastisement." What effect would…