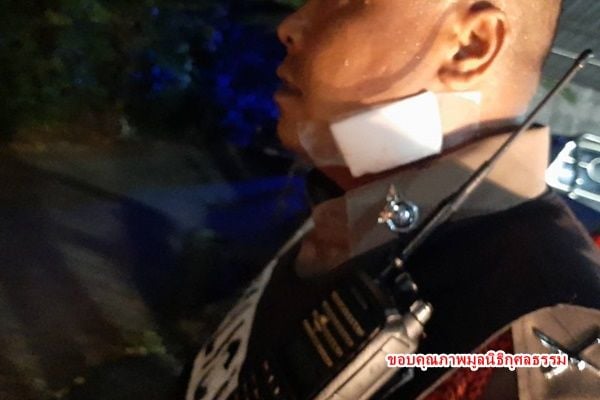 PHOTO: Knife wound to the neck received by one of the attending police - Phuket Hot News

A police officer has shot dead a robber in Phuket Town early yesterday (Wednesday). The knife-wielding robber, 34 year old Aekkasit Kesorn, from Nakhorn Sri Thammarat, had attacked the officer whilst being interrupted in the middle of a robbery. The policeman ended up with a knife wound to the neck.

The officer pulled out his firearm and shot the attacker in self-defence.

The incident happened at an apartment building in Soi Hongleng-U-Thit in Phuket Town around 2:30am yesterday. Police were called to the apartment after locals called police with reports of a young couple being robbed.

Officers Cpl Warat Jairerng and Snr Sgt Maj Nirute Boonrat arrived to find the attacker still in the middle of his attack on a young couple from Krabi and Trang. He was threatening them with a knife. The attending police noted that the woman had already received a knife wound to the stomach.

“They were frightened and asking for help. (The woman) was bleeding from a knife wound on the left side of her stomach.”

The attacker was holding the women’s bag when the police arrived at the scene. The attacker turned his attention to the two police, lunging at both of them with his knife.

“Snr Sgt Maj Nirute drew his gun and fired one shot to stop him,” police reported on The Phuket News.

“Aekkasit was shot in the neck. He collapsed and died at the scene,”

After firing the fatal shot that killed the attacker, Snr Sgt Maj Nirute faces charges of manslaughter. Both Snr Sgt Maj Nirute and the young female victim were released from Vachira Hospital after receiving attention to their wounds.

Police have also confirmed that the attacker was arrested and charged with illegal possession of a gun in Phuket eight years ago, with other drug charges in Nakhon Sri Thammarat in 2012. 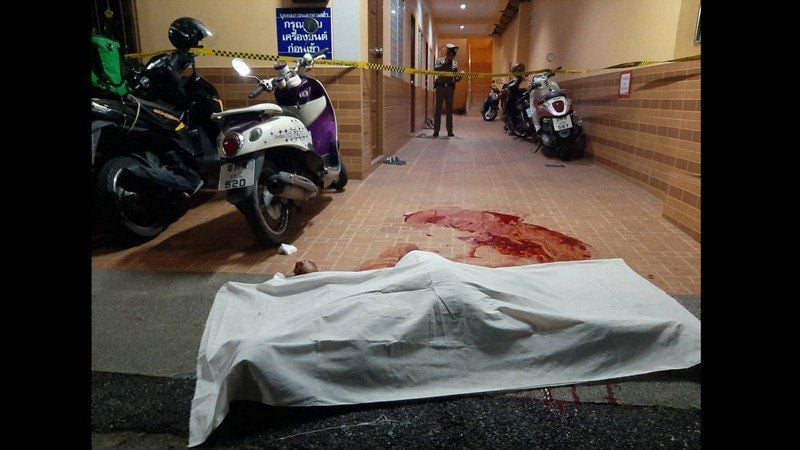