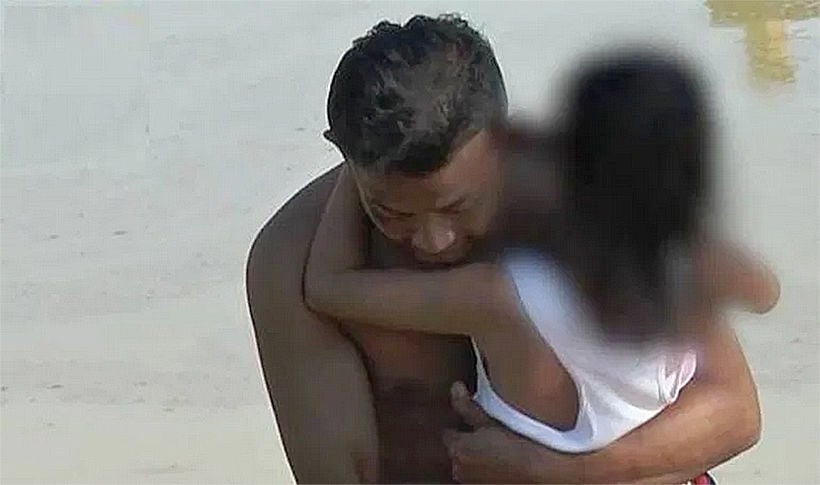 When police in the central plains province of Uthai Thani learned of a shooting incident they rushed to the scene to find a woman with a gunshot wound to her face and a man threatening to shoot himself in the head. Rescue workers rushed the woman to hospital while police tried to calm the man down and stop him from killing himself.

After about 30 minutes officers brought the man’s 7 year old daughter to plead with him not to go through with it. She told her father she would visit him even though he’d be arrested. He eventually put the gun down and hugged his daughter while apologising for his actions. He told police that his wife was having an affair and, when he threatened her with a gun, she and her mother tried to stop him with knives, forcing him to fire at them in self defence.

His wife says she fought with her husband often as he had an alleged drugs habit. She had previously left him for a month to live with her mother, but he wanted her to return to him and went to the mother’s house.

When he saw her talking on the phone, he became jealous and wanted to shoot her. Seeing the threat to her daughter’s life, the mother pushed her way into the line of fire and got shot in the face.

In another story, rescue workers in Chon Buri are frustrated with the repeated threats of a Thai man to kill himself every time his wife declines his sexual advances.

On Tuesday, police were notified of a man threatening to to jump from an overpass in front of a shopping mall. They found a 43 year old Thai man standing on the edge of the overpass looking down at the road, where cars were whizzing past while bystanders watched the scene with horror.

Officers teamed up with rescue volunteers to bring the man to safety. When questioned, he said his “wife declined to sleep with him at night”.

One rescue volunteer says the man has threatened to kill himself in public places 7 times, always for the same reason. He said the man’s actions are aimed at seeking attention and are useless, but he has to come and rescue the man in any case, “because it’s his duty”.