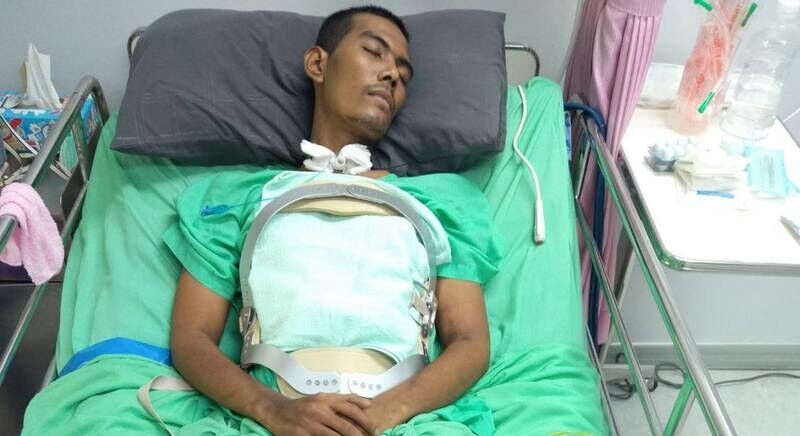 PHOTO: Aroon, the noodle vendor that was shot and paralysed by a drunk off-duty police officer. (via Eric Smulders)

The unfortunate noodle vendor that was in the wrong place at the wrong time when a drunken off-duty police officer fired a stray shot that paralysed the vendor has received nearly 400,000 baht in donations. Aroon Thongplab was accidentally shot on Bangla Road in Patong in the early morning of Feb 23 by the agitated inebriated officer. The bullet hit his spine and paralysed him. A Phuket expat was moved by the story and created a donation drive to help take care of the paralysed man’s family and medical costs.

Eric Smulders partnered with AC Legal Advisors to put together a charity campaign that went live on May 14 and has managed to raise 394,908 baht for the struggling family as of this weekend. The donations for the noodle vendor who was shot, about 50 of them, came mostly from expats who opted to remain anonymous.

Aroon is 25 and has a wife and 2 young children who are struggling to get by after the Royal Thai Police only provided 20,000 baht in compensation and assistance after the shooting. That money was received right after the shooting in February, and his wife, who now spends her time caring for her husband. She has tried to get further financial assistance from the police, but as of now, nothing has come.

Smulders was touched by the tragic story and the family’s need for help, with the massive expense of medical care and raising kids without income. He estimates the family need at least 25,000 baht a month to get by. So he asked the public for donations for the man who was shot.

“The family needs to rent a larger room as where they currently stay is just too small. They also need to pay for medical supplies, diapers, regular nursing care, and more.”

The man who shot the noodle vendor has been charged with attempted murder, firing a weapon in public, and carrying a firearm in public without reason, and has been stripped of his rank and fired from the police department. He was denied bail on Wednesday after claiming he wanted to be released to help raise money or donations for the victim he shot.

Others who wish to donate to the Aroon and his family can do so directly to his wife’s bank account:

Donors are requested to notify the legal advisors of donations as well:

King Cotton
1 hour ago, Thaiger said: 400,000 baht in donations And, as yet, only 20,000 baht has come from the Royal Thai Police, not merely the Thai Police, but the 'Royal' Thai Police. I wonder if his-nibs (Prayut, of course, as self-appointed…