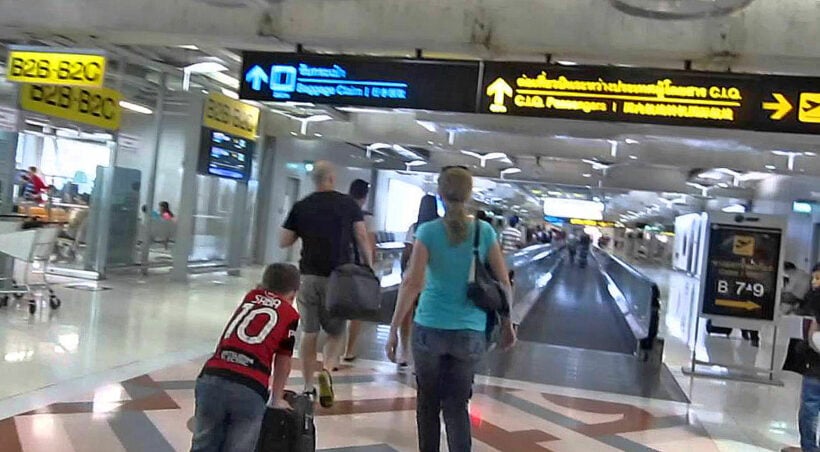 PHOTO: Welcome back to Thailand. Go home and stay there for 14 days!

Thailand’s Public Health Ministry yesterday designated 9 countries and 2 Chinese territories as high risk areas for the Covid-19 virus. He announced that visitors to Thailand from these destination are now subject to 14 day home quarantine and will have to adhere to strict health-related follow-ups.

The official government post, on a Public Health Ministry letterhead, was released to the media and posted on the Minister’s Facebook page. It was later removed from the Facebook page but no announcement was made to either clarify or cancel the earlier announcement.

• Visitors and Thai citizens returning from the high risk areas will be subject to 14 days home quarantine, even if they are cleared of the disease, unless they have permission from health officials.

• Those who do not have a permanent residence or lodging in Thailand are required to show officials, upon arrival, evidence of where officials can locate them during the 14 day period.

• Those who have any flu-like symptoms upon their arrival, such as a body temperature exceeding 37.5C, a runny nose, sore throat or breathing difficulties, will be sent to state hospitals for further testing, treatment or quarantine, depending on the seriousness of the illness.

• For those who cannot produce evidence of a formal lodging, such as a hotel or hostel, during their visit in Thailand, immigration officials are authorised to send them back home or to allow them entry subject to 14-days of self-quarantine.

Foreign visitors or Thai returnees from the newly designated high risk areas will have to file a daily report on their health with officials during the 14 day period and, if they become unwell or suspect they may be sick, they must inform health officials within 3 hours so that they can undergo further testing, receive treatment or be isolated.

• All the medical expenses incurred will be borne by the individuals themselves.

Earlier yesterday Deputy PM Prawit Wongsuwon told reporters there was no law in effect now that could force anyone to isolate themselves, contrary to the intention of the Public Health Minister’s later announcement.

The Thai Public Health Minister Anutin Charnvirakul briefly showed the announcement on his Facebook page yesterday afternoon with a message that all visitors from these countries will be required to quarantine themselves for 14 days with no exceptions. But the post was deleted minutes later without explanations, according to Bangkok Post. 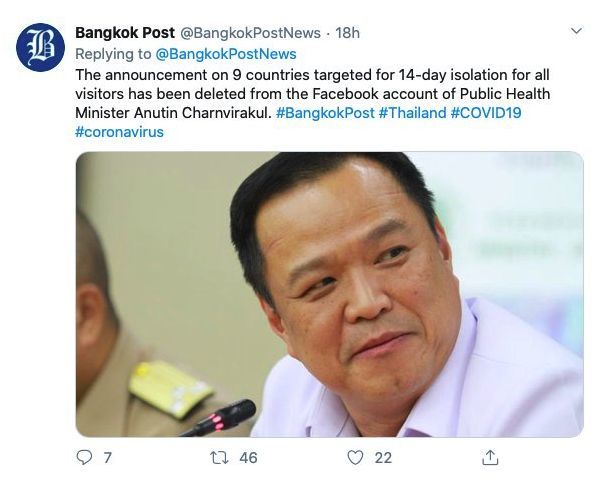 If you are booked to travel to Thailand which transits through one of the ‘at risk’ country’s airports, or are travelling from one of the ‘at risk countries, you will need to keep abreast of the latest information as the dust settles on yesterday’s official announcement, and then a social media withdrawal of the post.

Today, right now, there are no restrictions on arrivals. But the situation is very fluid. The Thai PM today released a raft of new edicts relating to Thailand’s response to the virus.