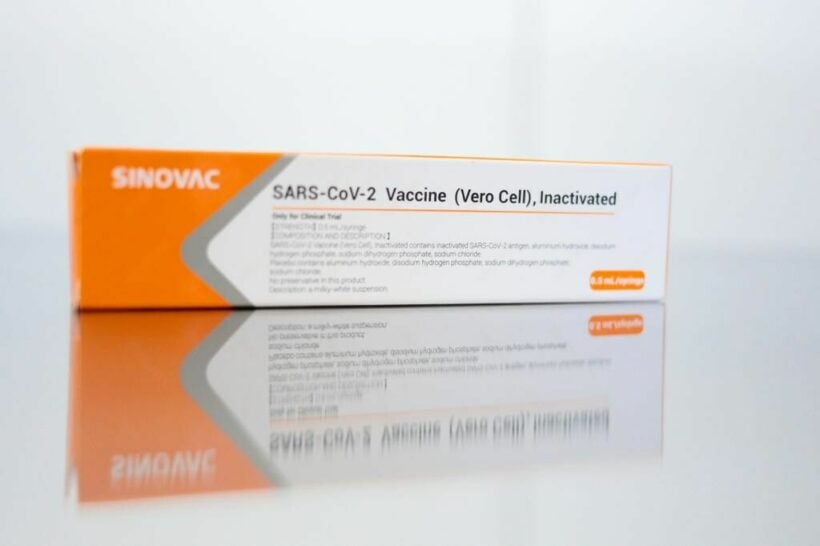 The head of the Department of Disease Control says Thailand will stop using the Sinovac Covid-19 vaccine when the current supply runs out at the end of this month. Dr Opas Karnkawinpong says the government programme will instead switch to using 1 dose of AstraZeneca, followed by 1 of Pfizer.

“We expect to have distributed all Sinovac doses this week.”

The Bangkok Post reports that since February, over 31.5 million doses of the Chinese-made Sinovac have been administered, initially to frontline healthcare workers and high-risk groups, as well as residents on the southern island of Phuket ahead of its sandbox re-opening in July.

The Public Health Ministry then moved to using Sinovac as a first dose and the AstraZeneca vaccine. Thailand was the first country in the world to adopt a mix-and-match protocol, with health officials defending the efficacy of the approach.

According to the Bangkok Post report, from next year, Thailand will procure 120 million Covid-19 vaccine doses, including 60 million doses of the locally-manufactured AstraZeneca. The Public Health Ministry says the country will only purchase vaccines with proven efficacy against new variants.

From November 1, the government plans to re-open 15 provinces, with quarantine waived for vaccinated tourists from low-risk countries. Health officials are in a rush to vaccinate 70% of its 72 million population by the end of the year, with just 36% vaccinated so far. The country has now recorded nearly 1.8 million infections, with 18,336 deaths. Over 98% of those have been in the last 7 months, as Thailand found itself in the grip of the worst wave of the virus since the pandemic began.

Alavan
18 minutes ago, Guest1 said: If I remember that right, the Biontech  Vaccine, that Israel got, was from Pfizer via the US. You remember wrong. Biontech Pfizer came from the EU, more specifically from Belgium. https://annualreview.pfizer.com/site-feature-puurs-belgium https://www.efe.com/efe/english/destacada/puurs-the-belgian-town-brewing-beer-and-a-covid-19-vaccine/50000261-4406586 https://www.brusselstimes.com/belgium/151481/pfizer-biontechs-vaccine-production-back-on-track-puurs-belgium-doses/