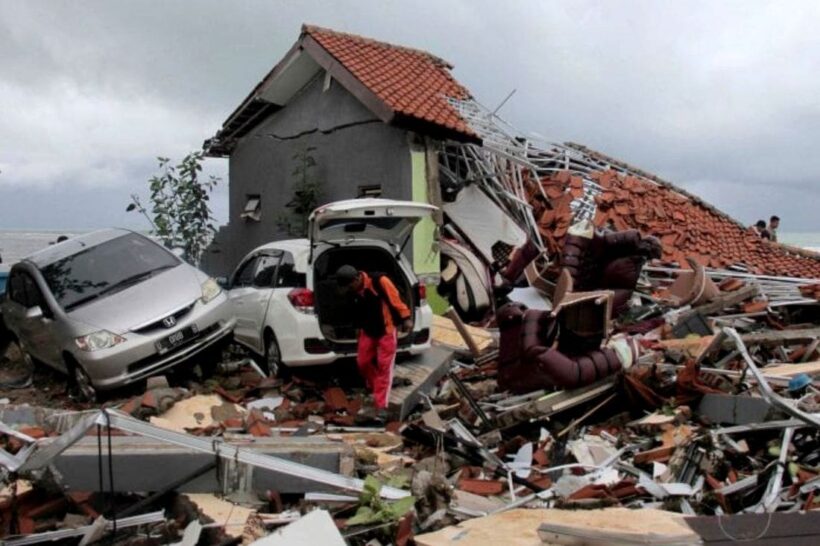 At least 222 people have now been confirmed dead and another 843 injured on the islands of Java and Sumatra, either side of the Sunda Strait, when the tsunami struck the area late on Saturday night around 9.30pm local time.

Authorities admit they expect the toll to climb when they reach more remote areas as today’s searches continue.

Officials say the disaster was caused by a combination of an undersea landslide, triggered by activity on Anak Krakatoa, one of the world’s most well-known volcanic islands, and tidal waves exacerbated by the full moon.

At least 28 people have been reported missing while thousands of residents remain on higher ground fearing more volcanic activity from the notorious Krakatoa archipelago that might trigger more tsunamis.

Dramatic video posted online showing the Indonesian band Seventeen performing under a tent on Tanjung Lesung beach at a concert for employees of a state-owned electricity company.

People sat at tables while others danced to the music near the stage. A child could also be seen wandering through the crowd.

Moments later the stage suddenly heaved forward and buckled under the force of the water, tossing the band and its equipment into the audience.

The band has released a statement saying their bass player, guitarist and road manager were killed, while two other band members and the wife of one of the performers were missing. Here’s a clip from Channel News Asia…

The 305 meter high Anak Krakatau (“Child of Krakatoa”) lies on an island in the Sunda Strait between Java and Sumatra islands, linking the Indian Ocean and the Java Sea.

It had been erupting since June and did so again about 24 minutes before the tsunami.

The volcanic island formed over years after the 1883 eruption and explosion of the Krakatoa volcano, one of the largest and most devastating in recorded history. The eruption reduced the once-might volcano to a smoking caldera. (A caldera is a volcanic feature formed by the collapse of a volcano into itself, making it a large, special form of volcanic crater. A caldera collapse is usually triggered by the emptying of the magma chamber beneath the volcano, as the result of a large volcanic eruption.)

Saturday’s tsunami has sparked memories of the massive 9.1 magnitude earthquake that hit the region on December 26, 2004.

It spawned a giant tsunami off Sumatra island, killing more than 230,000 people in a dozen countries, the majority in Indonesia’s Bandeh Aceh province.