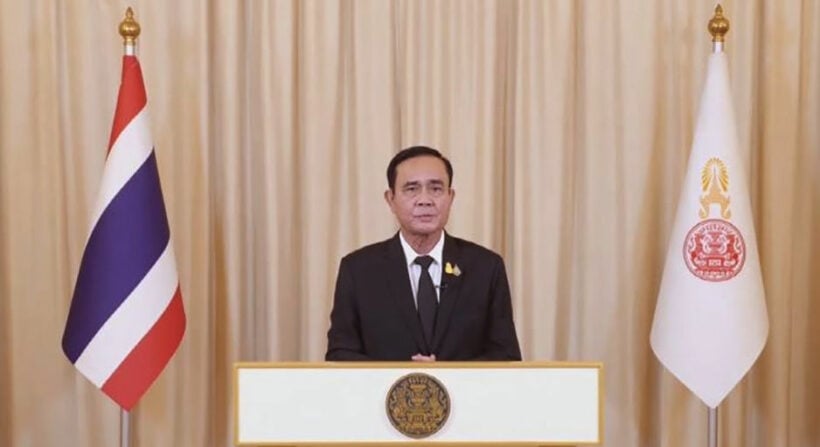 PHOTO: Thai PM Prayut passing on The King's messages on TV this morning - The Nation

“The government is profoundly saddened by the mass shooting and would like to extend its moral support to all Thais and the people of Korat.”

This morning the Thai PM General Prayut Chan-o-cha made a statement across the Thai television pool.

He passed on a message from His Majesty King Maha Vajiralongkorn and Her Majesty Queen Suthida who expressed their deep condolences regarding the tragedy that happened in Korat on Saturday.

He said that Their Majesties would like to give moral support to families of victims and all related officials.

HM The King has also ordered that the funerals of all the deceased will be covered under his royal patronage, including Buddhist prayers chanted at the funeral and royal cremation ceremonies commemorated as special occasions.

“Furthermore, the King has ordered privy councilors and senior officials from the Bureau of the Royal Household and Royal Security Command to act on his behalf in visiting the injured persons and the families of victims.”

“He has also ordered the establishment of a royal kitchen to provide food and support to officials who are working in forensics and cleaning the venue (Terminal 21 shopping centre) until the operation is complete.”

Lastly, the King has suggested that the government provide assistance to the affected people and officials in any way that it can, as soon as possible.

The Facebook page of the secretariat of His Holiness the Supreme Patriarch, has announced that they have passed on items valued at 10,000 baht for each of the victims’ families. Meanwhile, the director-general of the Comptroller-General’s Department, Poomsak Aranyakasemsuk, says the agency is contacting victims’ relatives so they can receive the full compensations they are entitled to.

And Advanced Info Service (AIS), the Thai telecommunications company, has given 1 million baht which will be offered to victims through the Nakhon Ratchasima provincial governor and has offered scholarships to support the education of the deceased victims’ children up to bachelor degree level.

The Bangkok Post also reports that Krungthai Bank and Government Savings Banks have written off debts owed by soldiers and police officers who were killed during the tragedy, and given up to 200,000 baht to each of the dead victims’ families.

Government ministers and officials are all wearing black today “as a sign of respect and solidarity”.