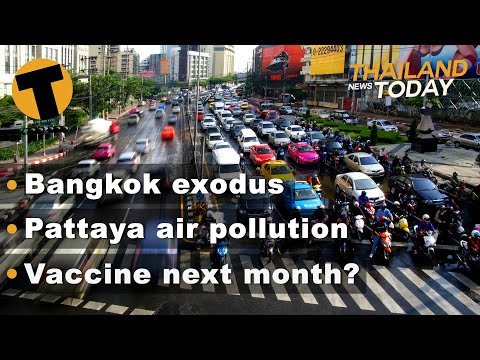 Last day of the week, and the second day of official public holidays in Thailand. We’ll be back on Monday with another Thailand News Today.

The Transport Ministry says just under 5.3 million Bangkok residents have left the capital as the long holiday gets underway. Not bad when the official population is 10.7 million.

The exodus began on Wednesday, a day before the holiday period began. Some 2.25 million have left by bus and van. And another 2.74 million personal cars have headed out of the capital, around nearly 40% higher than expected.

The 4 day long weekend was announced 2 months ago as substitute holidays for Songkran and attempts to get Thais and expats, able to get the time off, to travel and stimulate the domestic travel economy.

The state transport service, the Transport Company, says that it laid on 4,502 bus and van services, accommodating over 63,000 travellers. Yesterday, the number rose to 6,000 bus services and 200,000 passengers.

BioNTech and Pfizer have jointly announced their candidate Covid-19 vaccine could be released for public distribution before the year, at least in the US and Europe.

BioNTech co-founder Ugur Sahin says that both companies plan to apply for “emergency use authorisation” of their candidate vaccine in the US today, while European regulators are still in the latter part of the Phase 3 trials.

The 2 companies announced the completion of their trials involving 43,000 volunteers, more than 21,000 of who received the vaccine without any serious side-effects or consequences.

One of the key challenge with BioNTech/Pfizer vaccine candidate is the distribution. It will need to be stored at minus 70 degrees Celsius (-94 degrees Fahrenheit).

Responding to vaccine sceptics and the vocal “anti vaxxer” movement, Mr. Sahin says the only option was to keep providing “answers, information and transparency”. He hoped that once people were inoculated, “numbers would only grow when those people shared their positive experiences”.

The vaccine, if successfully released, will require an initial dose and a later booster injection.

Thai PM Prayut Chan-o-cha has warned pro-democracy protesters that they face the full force of the law if ongoing political rallies continue to escalate.

On Tuesday, thousands of anti-government protesters gathered outside the Parliament building, where MPs and senators were voting on draft amendments to the constitution.

The PM insists the government has attempted to resolve the situation through peaceful means, accusing protesters of not co-operating. He says the authorities have dealt with protests lawfully, but the situation is now worsening and tending towards violence. He adds that the ongoing unrest risks undermining the national interest and the Monarchy, as well as being a risk to the safety of people and property.

In response to Tuesday’s protests outside the Thai Parliament, and the police response, Brad Adams, Asia director at Human Rights Watch, responds. Published in full…

Thai police unnecessarily used water cannons and teargas against peaceful democracy demonstrators outside the parliament in Bangkok on November 17, 2020, in violation of international human rights standards.

“The Thai authorities should promptly and impartially investigate the violence, including the alleged use of firearms by pro-government demonstrators, and prosecute all those responsible for abuses regardless of their political affiliation or rank.”

The Narcotics Suppression Bureau confirmed the seizures, along with the arrests of 9 suspects, at its headquarters in Bangkok. The parade for the media of police and the seized narcotics are a staple in Thai police PR.

Pattaya residents are expressing concern over a recent spate of air pollution, as the coastal city finds itself engulfed in smog.

The deterioration in air quality has been ongoing for a number of days, with a cloud of haze obscuring the bay and neighbouring islands.

It comes as mass sugar cane burning is again taking place in farming communities around the country, an activity that has caused air quality problems in the past. While sugar cane burning is technically illegal, residents say the law is not strongly enforced, resulting in an annual rise in air pollution levels.