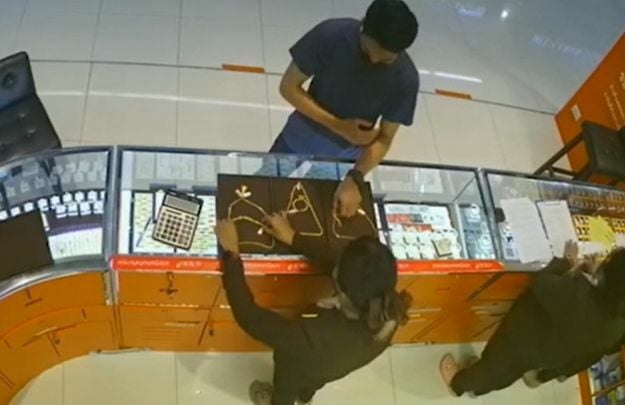 A gold theft suspect in Chon Buri allegedly stole nearly 200,000 baht worth of gold from a shop in the Don Hualor district, but police say he dropped something when he ran out… his phone.

An employee at the gold shop told police that a man went into the store on Sunday and asked to see gold items because he was looking for a gift for his girlfriend. Surveillance camera footage shows the employee taking necklaces and bracelets out of the display case. The man then grabbed a few gold items on the counter and ran off. The employee says the items were valued at 196,000 baht.

“However, in his rush to escape the mall, he dropped his mobile phone by accident which we gave to police to hopefully track him down.”

According to Pattaya News, Don Hualor police were able to track down the suspect, but did not release the name because the investigation is ongoing and they were preparing to make an arrest.

Transam
I guess if his phone rang whilst making his escape, he would have stopped to answer it...🤭
Jason
If this is his idea of a "life of crime"....forget it! He's obviously hopeless at it! Just hand yourself in, before one of your 2000+ facebook, Line, Whatsapp, whatever friends does it for you :D

palooka
No wonder RTP are lazy the crims do their work for them.