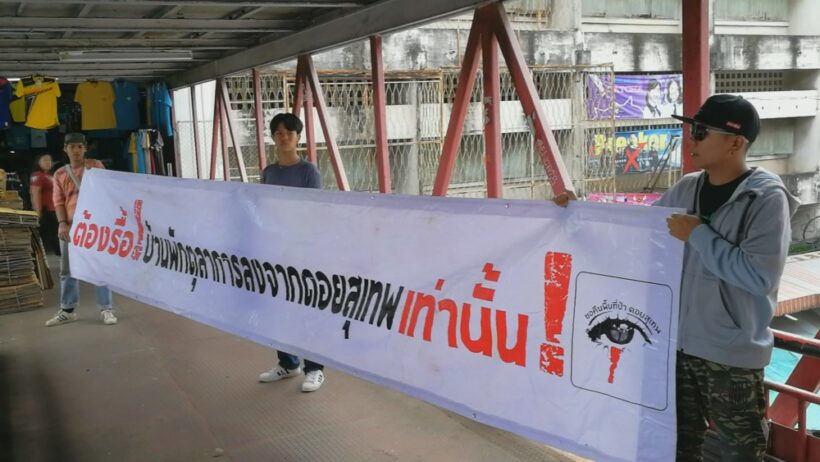 The Doi Suthep protesters in Chiang Mai had their campaign to remove the Thai judges housing development interrupted by the rescue mission at the Tham Luang Caves in nearby Chiang Rai.

Now the “Rak Chiang Mai” community network has organised four flash mobs at four key locations of Chiang Mai’s Muang district to highlight what they says is a lack of progress in removing controversial buildings at the foot of the “sacred” Doi Suthep mountain. The protests were staged today.

She said the flash mobs were to remind people that Doi Suthep Forest Reclamation Network and other organisations continued to call for return to the Treasury Department of the estate’s 45 houses and nine flats that they claim sit on land within the Doi Suthep-Pui National Park.

Flash mobs would also be held at various sites in the run-up to a major protest slated for August 26 at Tha Phae Gate, she said.

As well, a “citizens’ council session” will be convened on August 15 at Wat Nantharam’s community hall so that the residents and officials of related agencies could share their opinions and vote on proposed solutions to the ongoing stand-off, Saowakhon said.

Built at a cost of nearly one billion baht, the estate has a total of 13 apartment buildings, 45 houses and an administrative office building for Court of Appeals Region 5.

Following a thousands-strong protest on April 29, the government in early May brokered an agreement for a portion of the property to be handed over to the Treasury Department before being reforested and returned to the national park.

That deal allowed for the office building and four flat buildings to remain.

Now everyone can fly – from CNX to Hanoi