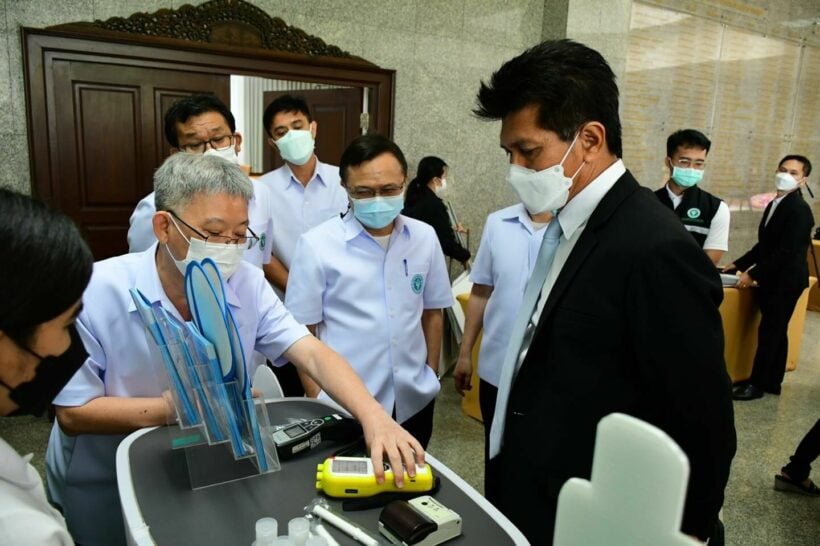 The Ministry of Public Health plans to use blood testers to measure the alcohol level of drivers during the “Seven Dangerous Days of Songkran”. Authorities say the blood test would be used in addition to the standard breathalyzer test. If anyone refuses to get tested, officers will assume them to be drunk.

The crowded roads during the annual Songkran Festival causes many traffic accidents, especially during the seven days from April 11 to 17, which are considered some of the most dangerous days to drive on the road in Thailand. On Monday, the Sathit Pitutecha, Deputy Minister of the Ministry of Public Health, told Thai media that the authorities are considering using an alcohol blood tester at some traffic checkpoints during the Thai New Year, which begins next week. He said the blood tester would be an alternative choice for drivers who couldn’t take a breathalyzer, such as drivers so intoxicated they’ve become inebriated, or someone who is seriously injured and can’t blow out.

Sathit added that drivers shouldn’t refuse to take a breathalyzer. If they do, the officers would assume them to be drunk and offer the blood tester to confirm their intoxicated condition. This year the ministry’s budget for blood testing kits is limited. So the they’re only able to supply the additional blood testing kits for the seven days when they predict police will need them the most. In the future, the Department of Disease Control may propose an increased budget of some 20 – 30 million bath to provide alcohol blood test kits at traffic checkpoints throughout Thailand at all times.

The Director General of the Department of Disease Control Opas Karnkawinpong added that if they found drunk drivers under 20 years of age, authorities would track down and charge whoever is found to have sold them the alcohol. Moreover, Sathit said that water transportation checkpoints would implement a similar measure, but that each private company concerned would adjust and announce it accordingly for the holiday. He said that authorities would enforce strict traffic measures and investigate each public bus terminal to ensure safety because many foreign tourists are expected to travel around Thailand during Songkran.

DoUKnowWhoIAm
40 minutes ago, Thaiger said: choice for drivers who couldn’t take a breathalyzer, such as drivers so intoxicated they’ve become inebriated Quite a few then😵