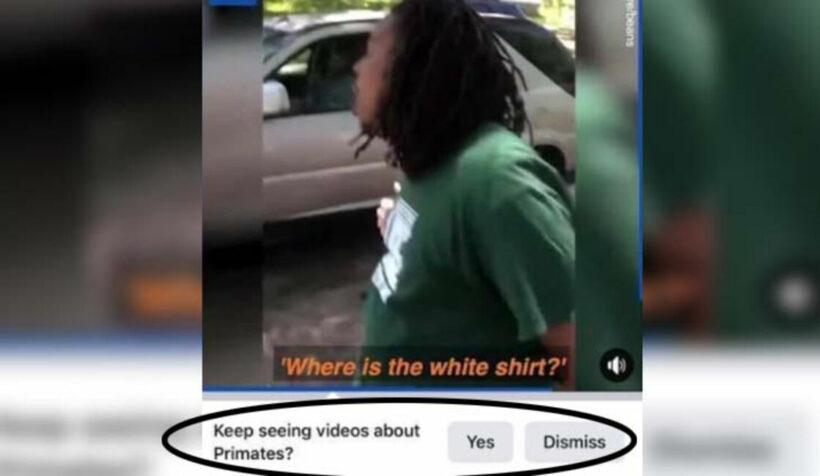 Facebook has disabled their topic recommendation features on videos today after the AI software appears to have mistaken black men in a video for monkeys. The video in question was from the British tabloid The Daily Mail and was title “White man calls cops on black men at marina.” But under the video where auto-generated suggestions are made to encourage Facebook users to continue watching videos, the prompt appeared: “Keep seeing videos about Primates?”

The video was posted in June of 2020 and it is unclear if the prompt had recently changed or if it was only now noticed and publicised, as the New York Times reported that users had seen the prompt in recent days.

Former Facebook content design manager Darci Groves spotted the prompt recommending Primates and took a screenshot of the offensive suggestion. She tweeted the message with the hopes of getting the attention of her former Facebook coworkers, calling the message unacceptable.

A Facebook spokesperson quickly released a comment also calling the Primates link a “clearly unacceptable error” saying that they have disabled the feature and will analyse the software that makes video category recommendations.

“We apologize to anyone who may have seen these offensive recommendations. We disabled the entire topic recommendation feature as soon as we realized this was happening so we could investigate the cause and prevent this from happening again.”

While technically humans are a species in the Homo genus which falls under the order of Primates, which includes monkeys, apes, tarsiers and lemurs, the implication or naming of a black person as a monkey or primate has been used for centuries as a racist and inflammatory insult, hence the uproar over the error on Facebook.

Facebook has previously run into trouble in Thailand with its automated software when its translation services mistranslated the word “salute” and used “slut” instead. The post though was a story about the Royal family, so the error caused such an uproar that Facebook completely disabled Thai translation since June.

DiJoDavO
Ouch.... So now they will cancel Facebook?
Dmak
Actually.. here is some misunderstanding about animal kingdoms... All humans are part of the primate kingdom .. this kingdom doesn't include monkeys but only the greater apes...
WaccineChinawatiiRaporn
Patrick Aloysius Ewing is a Jamaican-American basketball coach and former professional player who is the head coach of the Georgetown University men's team. Wikipedia Born: August 5, 1962 (age 59 years), Kingston, Jamaica Spouse: Rita Williams-Ewing (m. 1990–1998) Education: Cambridge…

MrStretch
I still remain confused why anyone would use FB for anything related to news or information. They only feed you the shit that you already believe in and want.  Their job isn't to inform, it's to keep your eyeballs on…

gummy
5 minutes ago, MrStretch said: I still remain confused why anyone would use FB for anything related to news or information. They only feed you the shit that you already believe in and want.  Their job isn't to inform, it's…