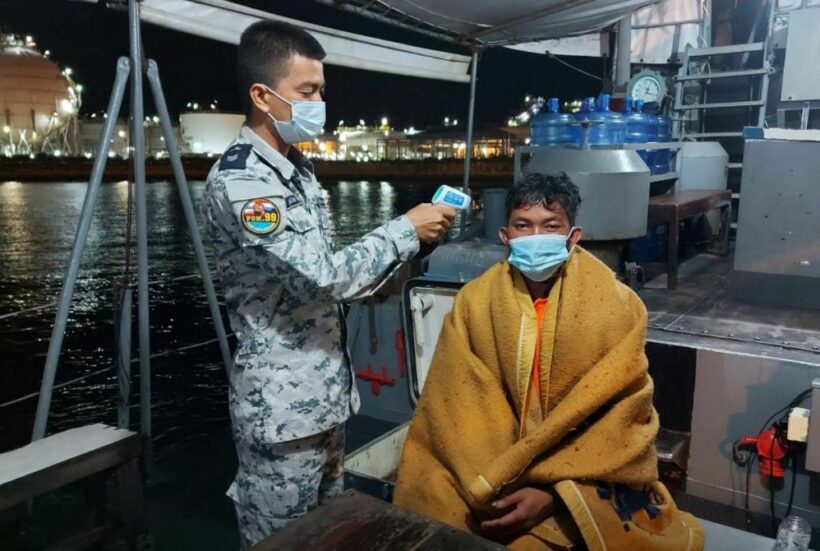 PHOTO: A Cambodian man was rescued after 2 days at sea near Rayong. (via Pattaya News)

While garbage in the sea is generally not a good thing, floating debris appears to have saved the life of a Cambodian man in the Gulf of Thailand off the coast of Rayong. The man was rescued today by the Royal Thai Navy after 2 days adrift at sea, clinging to debris, after falling off his fishing boat yesterday morning.

“We Care, We Protect Squad” is the team of the Royal Thai Navy First Area Command that spotted and rescued the Cambodian man floating in the sea off the coast of Rayong Bay. He spoke little Thai and had no identification card, so officials had trouble getting a lot of information from the man. He said that he was on a fishing boat named “Chock Pawin Chai” when he fell overboard.

The man said he survived the ordeal by hanging on to floating debris over the course of 2 days until the Royal Thai Navy pulled him from the sea and rescued him. The Navy has reached out to his employers who own the fishing boat to try to get details on what occurred as they investigate the incident further.

They issued a statement reminding people to take precautions when sailing or operating small fishing boats, especially during monsoon season. Recent storms have blasted the area with heavy rains and flash floods which have resulted in several deaths.

The Navy also informed the public that the Royal Thai Navy First Area Command can be reached 24 hours a day at 0-3843-8008 or 09-2758-5977. They requested that anyone who witnesses or is involved with any kind of marine accident contact them immediately.

Guest1
Looks like that wasn't a search for this guy, then. The owner of the fishing boat did not even bother to call it in? Rescued by accident!

gummy
1 minute ago, Guest1 said: Looks like that wasn't a search for this guy, then. The owner of the fishing boat did not even bother to call it in? Rescued by accident! Lucky he was Cambodian, had he have been…