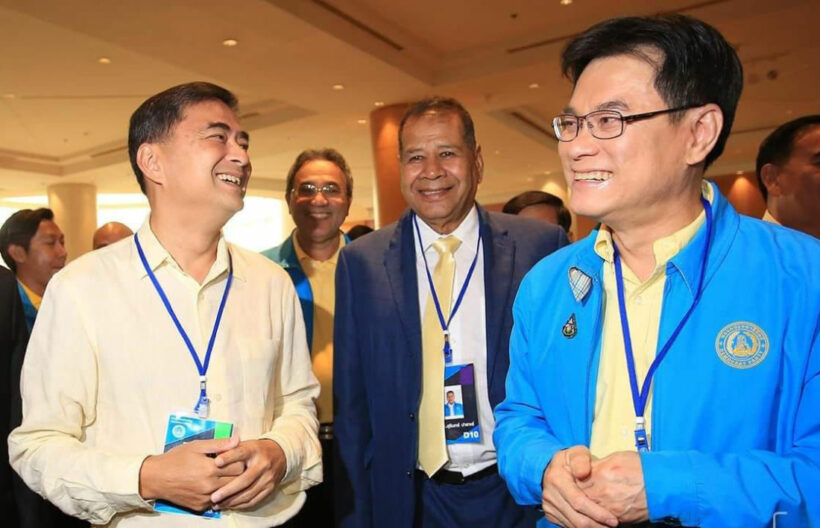 With a new leadership team heading up the Democrats, the focus is now on which way they will tip their MP seats in the formation of the new lower house in the Thai parliament.

Whilst most pundits have thought they’d be leaning towards supporting the Palang Pracharath party (PPRP), who have current PM Prayut Chan-o-cha as their prime ministerial candidate, pundits believe the new leadership team are more unpredictable now as to which way their allegiances will swing.

The Democrats performed poorly in the March 24 election prompting the immediate resignation of then leader Abhisit Vejjajiva on the morning of March 25 when results were published showing the party had lost a huge chunk of their votes to the new Future Forward party and Palang Pracharat.

There won’t much time to relax as the pressure is now on for their first major decision to decide whether to partner with the PPRP, work as an independent opposition, or join up with by Pheu Thai and Future Forward.

Many Democrats have said outright they would never side with Pheu Thai, mortal political enemies for over a decade. But they’ve also said they wanted to ensure they could help get the Army out of politics.

So the potential of them to be a small political opposition rump, siding neither with PPRP or Pheu Thai could be a reality, making it harder for any of the larger parties to pull together a majority lower house government.

Despite their differences, the Democrats, Pheu Thai and Future Forward share a common aim of amending the current constitution, which is widely seen as a tool to help Gen Prayut prolong his grip on power.

Mr Jurin and his key supporters, including the former leader Abhisit, Chuan Leekpai, the party’s chief adviser, and Banyat Bantadtan, another former party leader, have made it clear the Democrat Party should not support the PPRP to set up a proxy Army government.

So, until the Democrats, and the other large chunk of MP seats from Bhumjaithai, announce where they are placing their votes, we are no closer to knowing what the next parliament will look like.

Meanwhile, HM The King has announced that he will open the new parliament on May 24 so between now and then, something will have to happen. Expect phones too run hot in the days ahead.

Compulsory health insurance for foreigners – will it affect you?