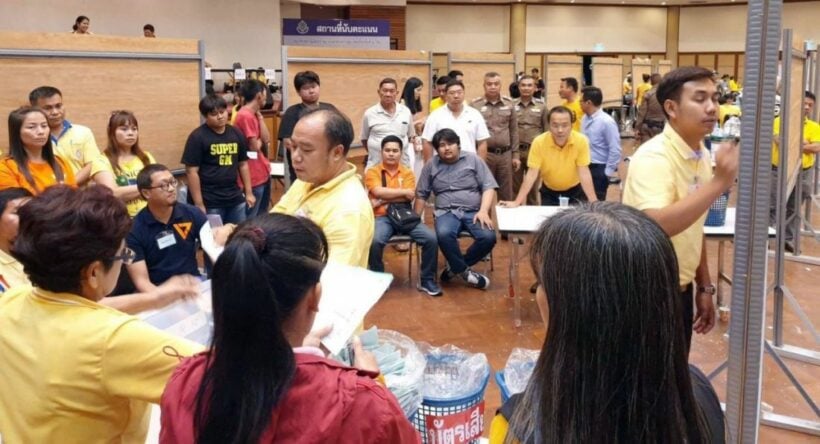 Five times they counted and five times they got different results. The re-run of the election and the counting of votes in Nakhon Pathom, west of Bangkok, couldn’t have gone worse for the Election Commission, coming under fire from all directions over irregularities, forced recounts and hundreds of small errors in the counting process.

The credibility has come under renewed scrutiny after it announced incorrect results for a recount in a Nakhon Pathom constituency. It was one of two poll re-runs after significant irregularities were found after the March 24 election.

Sunday’s mistake came to light when Future Forward candidate Savika Limpasuwanna, after trailing behind Democrat Sinthop Kaewpichit by 147 votes in the first count, was found to be ahead of him by 62 votes in the second tally.

The Democrats immediately protested the re-count of the re-count, arguing that total votes from over 240 polling stations in the constituency should have shown Sinthop winning by four votes.

The EC yesterday admitted the Democrats were correct, and reasoned that the mistake had been made because the announcement was “unofficial”. As of yesterday, the poll authority had yet to issue an official result.

The agency’s deputy secretary-general Sawang Boonmee says the recount process had yet to be completed, adding that the candidates had already been invited to witness its problems.

Initially, Sawang said the inconsistencies may have occurred from officials entering inaccurate numbers.

He later admitted that such repeated mistakes could shake the agency’s credibility, though he insisted that eventually, everything would be checked. He added that the ballots were stored safely in case a reason for rechecking or correcting the count arose.

However, the incident has further eroded public trust in the agency after a series of similar irregularities.

The public has been angered not only by the EC’s failure to provide a conclusive election result four weeks after voting, but also by mistakes that continue occurring, apparently due to poor administration.

The Future Forward Party yesterday demanded that a new election be held in the Nakhon Pathom constituency due to the confusion and inconsistency in vote counts.

Meanwhile, political observers said to avoid bankrupting its credibility altogether, the EC should release the election results from every polling station for public inspection including posting all results online.

Meanwhile, former EC commissioner Gothom Arya advised the agency to be humble, accept criticism and either improve or provide proper explanations. The most important thing about an election is accuracy, he said, adding that the wide-scale public doubt should be cleared with a recount of votes.

Could cannabis cigarettes be available in your local convenience store?