A crocodile was hunted and killed after it attacked and ate a 55 year old fisherman. Reports reveal that villagers at Riau province Indonesia, on the central eastern coast of Sumatra facing the Strait of Malacca, got together to help to catch the crocodile.

According to the fisherman’s friend ‘Toha’, on Sunday night a 4 metre crocodile pulled the 55 year old man ‘Syafri’ straight into the Lakar River. Toha managed to scramble up the muddy banks to safety after witnessing the reptile attack his friend at close quarters.

He says he tried his hardest to attract the crocodile’s attention before deciding to call for help.

While searching for the crocodile on the morning after the incident rescue teams made a gruesome discovery of the victim’s leg washed up on the river bank.

Not long after discovering the body part they managed to track and identify the suspected crocodile. They shot and killed the animal before bringing it up to shore and cutting its belly to reveal if it had eaten Syafri. 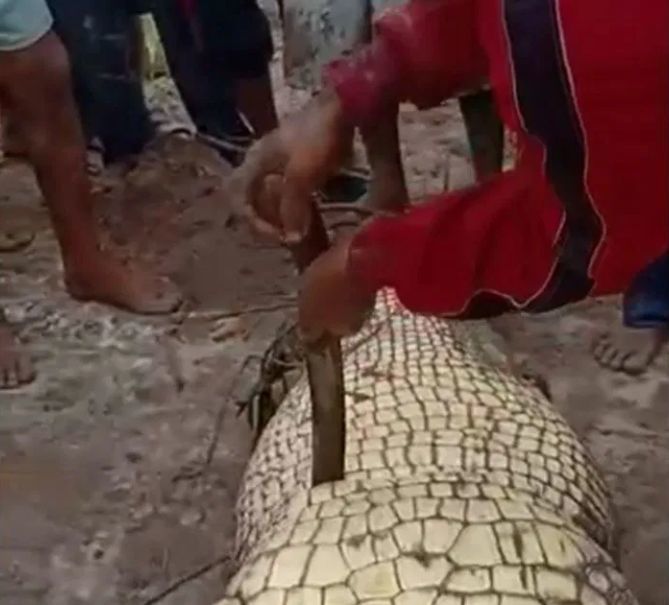 Indonesian forest officials blame the villagers for not being extra careful in this area, where it is known to be the perfect habitat for saltwater crocodiles. Although the saltwater crocodiles are wildlife animals protected by Indonesian law. Heru Sutmantoro, the head of the Riau province’s Natural Resources Conservation Agency acknowledged the villager’s actions whilst saying they are unlikely to prosecute anyone over the incident.

“We received the information that the attack happened on Sunday night, we have long warned the public to avoid saltwater crocodile habitats and be careful around that area.”

“This was not the first attack, similar attacks have happened before around the Lakar River.