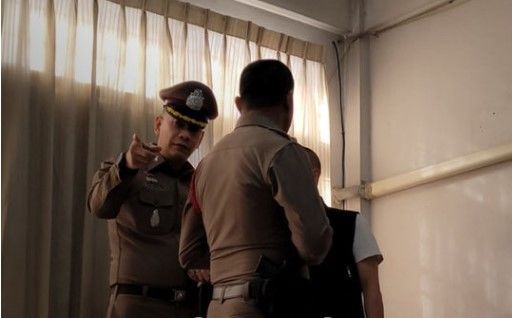 A man allegedly shot and killed a woman before shooting himself to death after finding her in bed with another man. Police say the other man was shot and injured as he was fleeing the Samut Prakan apartment.

Police were called to the second floor apartment above a boat noodle shop and found the owner of the shop, identified as 35 year old Sudarat, shot in the head. Her body by the foot of the bed. On the bed, a man, identified as 46 year old Phaison, had been shot through the right temple, police say. The gun was found by his feet and police say 5 shots were fired altogether.

A man identified as 25 year old Thanakorn was shot in the arm and chest while running out of the apartment, leaving a trail of blood on the stairs. He was taken to the Rattarin Hospital in Bang Poo.

A noodle shop employee told police that Phaison came by at 6am and asked where Sudarat was. He went upstairs and the employee heard gunshots. Thanakorn was able to make it down the stairs. He was covered in blood.

Police says Phaison and Sudarat were lovers and Phaison financed Sudarat’s noodle shop. Police are still investigating, but suspect the shooting was a murder-suicide.

Pattaya journalist injured as foreigner steals gun, fires at police, then kills himself