The deadly Wuhan Coronavirus outbreak, which has infected thousands and spread to 15 countries since it emerged in China, has also spawned many false claims on social media. Here’s a selection of false stories debunked by AFP’s Fact Check service…

1. Sydney food is not contaminated
In Australia, multiple Facebook posts shared hundreds of times claim to show a list of foods and locations in Sydney which have been contaminated by the new coronavirus. One post, published Monday, identified different types of rice, cookies and onion rings that allegedly contained “traces of the virus”. It also claimed that a “bureau of diseasology” had run tests and discovered the strain in several Sydney suburbs.

But local health authorities told AFP the locations listed posed no risk to visitors, and the foods named did not appear in the New South Wales food authority’s list of recalls and advisories.

2. Video is not Wuhan market
A video with more than 88,000 views on Facebook alone purported to show the market in Wuhan where the virus strain is thought to have begun. In reality, it was filmed at an Indonesian market.

The post was published on an account in the Philippines on Sunday, and showed bats, rats, snakes and an assortment of other animals and meat products being sold at a busy market. AFP has confirmed the video was in fact of a market in Indonesia in 2019.

3. Fake death projections
A Sri Lankan Facebook post shared thousands of times claims doctors are projecting that the entire population of Wuhan, a city of 11 million people, would likely die of the coronavirus. This is false; neither Chinese nor any other authorities have made any such projection.

4. Salt water can’t kill the virus
Multiple posts on social media platforms both outside and within China have claimed a Chinese expert told people to rinse their mouths with salt water to prevent infection. The claim is false; the named expert’s team said saline will  not “kill” the virus and urged people not to believe or share online rumours.

5. Conspiracy theories
Multiple posts on Twitter and Facebook allege that the Novel Coronavirus was created intentionally, with one theory even speculating that it was manufactured by the US Centers for Disease Control and Prevention.

These posts included patents, but they were registered to combat different strains of coronavirus, by developing vaccines, for example.

6. False alarm in France
Several social media posts have circulated in France claiming that people have been infected in numerous parts of the country. These false reports were accompanied by digitally manipulated images made to resemble screenshots from several French news sources, including AFP.

However while there were four confirmed cases in France as of yesterday, no cases have been confirmed in the reported areas.

In a related development, AFP also debunked a claim about a Wuhan hospital for coronavirus patients which was allegedly completed in just 16 hours: the photo is a stock image of the hospital that has circulated online since at least January 2019; AFP visited the construction site of a new hospital in Wuhan on Monday and found it was still in the very early stages of construction. 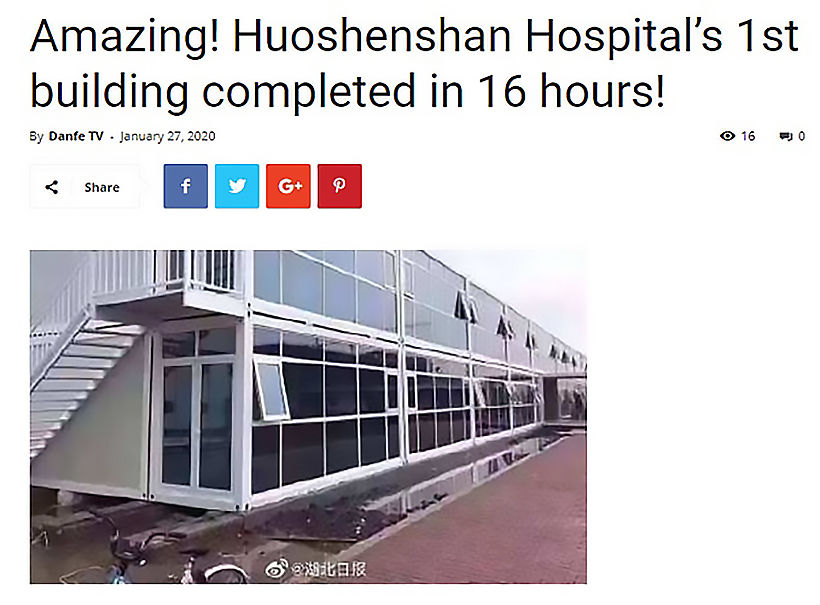