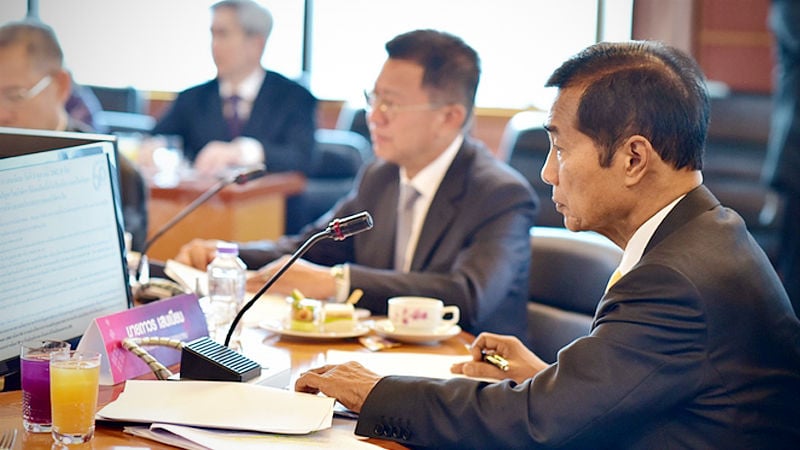 Thai Airways International is in the process of slashing costs and restructuring. Deputy Transport Minister Thaworn Senneam discussed Thailand’s open sky policy and stressed the importance of increasing revenue and reducing expenditure to turn the airline around and make it sustainable.

Thaworn, along with the assistant secretary at the Ministry of Transport and other officials visited Thai Airways’ HQ to evaluate the current progress.

Thaworn looked at operational problems faced by the country’s legacy airline in improving its financial results and restoring its place as one of the world’s leading airlines. He followed up on the ministry’s announced policies, such as a turnaround plan and business plan, acquisition of 38 aircraft, company management and structure, the proposed U-Tapao aircraft maintenance centre, and plans to boost revenue and operating results. New policies were also presented, such as human resource management, managing company property to maximise best-use, and improving sales and marketing between the national carrier and its budget offshoot, Thai Smile.

Thai Airways president Sumeth Damrongchaitham said the carrier is acting on the policies issued by the Transport Minister to resolve financial losses and achieve longstanding profitability. He said progress is being made on some of the projects.

Thai Airways is now going through a revaluation of its plan to acquire 38 aircraft by 2026. The board of directors need a plan to acquire aircraft to replace 17 planes that will be decommissioned, but the plan must be suitable for the current financial situation and altered conditions. Management will study aircraft types and present the results to the board in February. The company will present information on the number of aircraft, acquisition methods and investment sources for consideration of the board at their meeting in March. The plan is intended to help the company to grow and not be a financial burden on the government. It will be presented to the Ministry of Transport by March 31.

Meanwhile, negotiations are still ongoing on between Thai Airways and Rolls Royce: THAI is seeking compensation from Rolls Royce for a period in which its aircraft were not operational as they were awaiting spare parts, resulting in damages and lost business.

The company is working to increase revenue according to the Middle Turnaround Plan (2020-24), through “innovation and digital technology, a sales development plan and boosting ancillary revenue to improve online sales”.