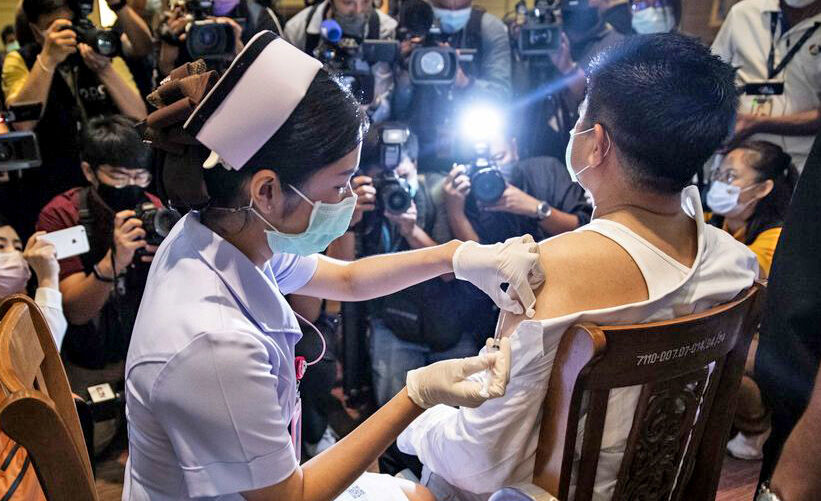 Today the public health department has reported 4,528 Covid infections and 24 C-19 related deaths. Another huge proportion of todays cases, 1,902, are from Thai prisons. We will post the provincial totals early in the afternoon as usual.

• 1 million doses the Sinopharm Covid vaccine is poised to arrive in Thailand over the next month. It will be offered as a paid alternative for particular groups who don’t want to wait for the state-offered free vaccines. The announcement was made by the Chulabhorn Royal Academy on Friday. The Academy is sponsored by HM The King’s sister, Princess Chulabhorn.

The Academy announced that, as the vaccines are being acquired by the institution with their own money, they would have to charge for it.

Sinopharm is a Chinese government-owned pharmaceutical company. The Sinopharm Covid vaccine has been approved for emergency use whilst the Sinovac vaccine, which has provided more than 90% of the Thai roll out, has been registered for use with WHO but not approved, despite being on the WHO desk for nearly 3 months.

Meanwhile, the Thai government were politely ‘hesitant’ to give the private move a full blessing and said they are “moving forward” to allow private organisations to import foreign-manufactured, and Thai FDA approved, vaccines.

• A new study of 862,000 recipients in Uruguay has found that the Sinovac vaccine is effective in reducing Covid-19 death by up to 97%. The study comes as early results are gathered from Uruguay’s vaccination campaign which has been 80% Sinovac vaccines given to its citizens. They found that for people who had already been fully vaccinated with 2 doses, infections were down 57% and severe cases requiring intensive care were reduced by 95%. CoronaVac is a traditional type of vaccine, using inactivated virus to trigger immunity, while Pfizer uses RNA messenger technology. (The original information was posted by Thai PBS World which is the government’s English mouthpiece)