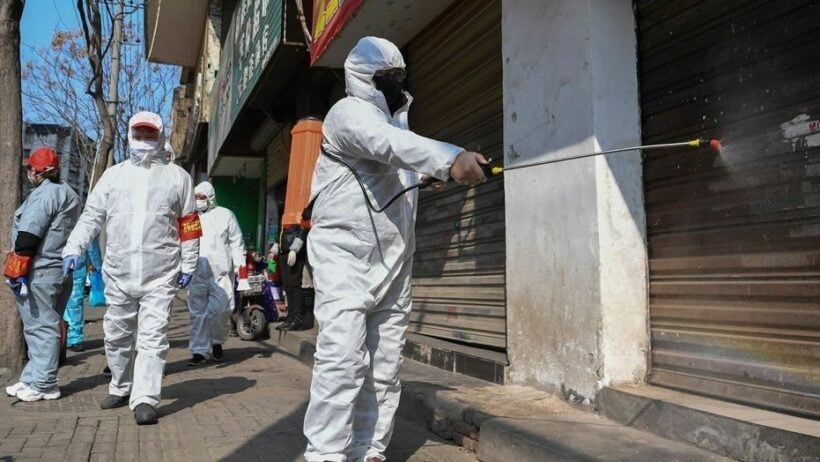 There’s been a sharp spike in new cases of coronavirus, principally in the central Chinese province of Hubei. There are now 60,373 world cases, 59,805 in China. 1,369 people have died and over 6,000 recovered.

242 new deaths were recorded yesterday, the deadliest day since the start of the outbreak. So what’s behind the big rise? It’s not actually a spike in the disease, but it reflects a change in the way statistics are collected and reported. Hubei health officials are now using a broader definition to diagnose people – which accounts for the vast majority of new cases. Until yesterday, the number of people diagnosed was stabilising.

Hubei province – which accounts for more than 80% of Chinese infections – now includes “clinically diagnosed cases” in the number of confirmed case statistics. Earlier this week, a number of leading provincial health officials and party leaders were side-lined from their jobs.

Other key Coronavirus news from around the world…

• Economists are already factoring in the impact of the coronavirus outbreak. Different banks and research institutions estimate that China’s gross domestic product (GDP) growth for Q1 this year could be less than 4%. Whilst that’s still laudable and would be welcomed by most western economies, it’s a sharp drop from the usual 6% plus annual growth rate. The problem is that China’s economy represents more than 20% of the world economy.

• Thailand will also be highly affected by China’s (and to a lesser extent, Japan’s) economic slumps due to its close economic ties with China through tourism, business and exports. Some international economic research houses are cutting Thailand’s projected GDP growth for 2020 from 2.7% to 2%, or less. One even forecast the possibility of negative growth for the south east Asian Kingdom.

• Several international cases of the coronavirus, from the UK and South Korea, can be traced back to Singapore. As a result, some countries are now advising against travel to the south east Asian business hub. The tiny city-state now faces unique challenges, whilst generally being commended for its management of the crisis.

Changi Airport remains one of the most interconnected hubs in the world. With a flight taking off or arriving every 80 seconds, it’s more connected than JFK in New York or San Francisco in the US, and Dubai in the UAE. Now, dozens of thermal scanners and staff wearing face masks are dotted around the terminals, automatically checking temperature, cough and other symptoms of passengers as they enter and exit Singapore.

• 12 days separate the man’s departure from Singapore after a business conference, and finding out he had been infected with the new coronavirus. When UK citizen Steve Walsh was tested he had no symptoms. But his case has now set in train a series of events leaving UK health officials battling to stop the coronavirus from spreading across the UK.

Complicating the issue, the 53 year old had a four day stopover at a French ski resort on his way back from the Singapore conference. He didn’t know it, but he was spreading the virus as he went.
By the time he alerted the British health system, the NHS, after being contacted by Singaporean authorities about the spread of coronavirus at that conference, he had unwittingly passed it on to 11 other UK citizens at the ski resort. Five of them were already back in the UK, two were GPs.

• South China Morning Post reports that the Cathay Pacific/HSBC Hong Kong Sevens is the latest sports event to be caught up in the city’s battle against the virus outbreak and will likely be moved back to October. This year’s 45th edition of the rugby tournament, was scheduled to take place at Hong Kong Stadium from April 3 – 5. Earlier organisers said the event was “all systems go” despite the battle against the virus, but have had to shelve the World Rugby Sevens World Series stop for at least six months.