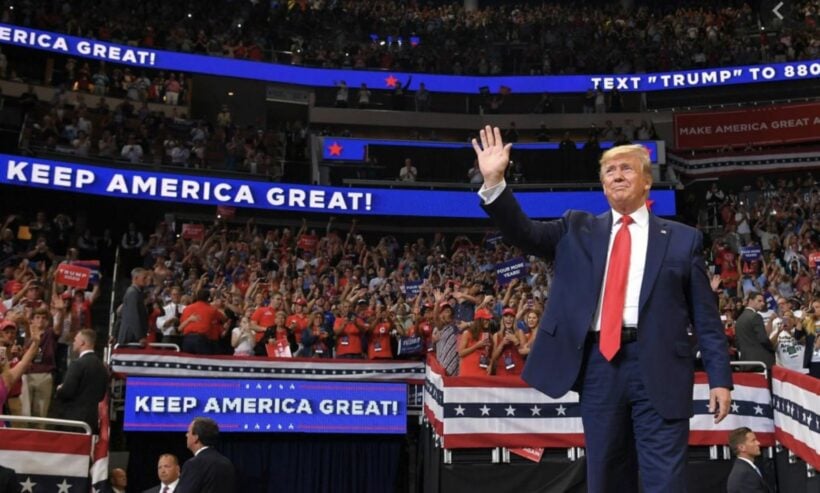 “In an increasingly globalised online world, the world’s youth have started getting involved in the narrative for this November’s US Presidential election.”

In the days leading up to Saturday night’s election rally for US President Donald Trump – his first since March – the campaign management were touting figures suggesting that as many as 1 million people had signed up to attend. But the crowds, both inside and outside Oklahoma’s BOK Centre in Tulsa, didn’t emerge. In the wake of the event the reasons being touted vary from threats of protesters, fears of Covid-19, hacks from K-Pop and TikTok users, and poor management by Trumps’ re-election team.

There were large sections of seating left empty in the 19,000 seat venue, and plans for an additional Presidential speech in an outdoor overflow area were cancelled when few attendees filled the spaces made available. The President spoke to his enthusiastic crowd of supporters for around 90 minutes.

Tulsa Fire Marshal’s Office claimed that there were just under 6,200 people in the arena on the Saturday night event. But Trump campaign adviser Mercedes Schlapp, during an interview on “Fox News Sunday,”  claimed that turnout was lower than expected because Mr. Trump’s supporters were afraid of protests outside the venue turning violent.

“People were concerned about the demonstrations, so we saw that have an impact in terms of people coming to the rally. There were people and families that couldn’t bring their children because of concerns of the protesters.”

But media reports from the venue didn’t report any major protests or disruption although one group of protesters blocked one of the venue’s three entrances for about 15 minutes after most people had already entered the arena.

Flexing their online muscle, K-Pop and TikTok social media users bombarded the event’s website reserving seats for the event but never turned up. In an increasingly globalised online world, the world’s youth have started getting involved in the narrative for this November’s US Presidential election. But Mr. Trump’s 2020 campaign manager, Brad Parscale, said that the campaign had weeded out “tens of thousands” of bogus mobile phone numbers ahead of the rally.

“The fact is that a week’s worth of the fake news media warning people away from the rally because of Covid-19 and protestors, coupled with recent images of American cities on fire, had a real impact on people bringing their families and children to the rally.”

By the time President Trump made his way onto the stage, there had been some tense verbal confrontations outside the arena but no reports of violence. With event attendees and protesters ever-ready with their phones to capture any fracas, all they captured were civilians carrying military-style rifles and pistols wandering amid the crowds claiming they wanted to keep people safe. Tulsa police and US National Guard troops kept opposing sides apart.

Media reports today that, on the flight to Tulsa, Oklahoma, Mr. Trump was “unhappy with television images of the sparse crowds and vacant seats”. He had complained that his campaign aides should have known about the efforts to embarrass him, and argued that potential attendees were further scared away by his campaign’s public confirmation that six members of the advance team tested positive for Covid-19.

Democrats yesterday criticised the Trump campaign’s decision to hold the rally at all, amid the escalation of coronavirus cases in the US. Last week it was publicised that the sign-up page for the rally contained a disclaimer that attendees… “voluntarily assume all risks related to exposure to Covid-19” and agree not to hold the campaign or venue liable should they get sick.

The Oklahoma Supreme Court last week denied a request that everyone attending the indoor rally at the BOK Centre wear a mask – few at Saturday’s event appeared to be wearing them.