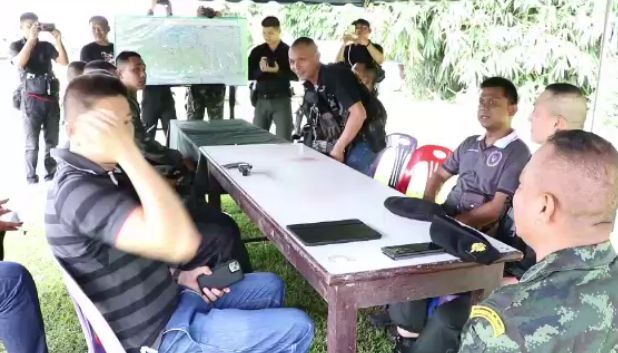 After a large-scale manhunt, police and military investigators arrested 4 men for their alleged involvement in the murder of a police officer in the southern province Pattani, an area with ongoing insurgent violence.

The police officer was riding his motorcycle when he was shot by a pillion rider on another bike. The rider, dressed in women’s clothes and wearing a headscarf, pulled out a M16 assault rifle. When the officer fell, the attacker got off their bike and shot the officer point blank with a 9mm handgun before stealing the officer’s pistol and fleeing the scene.

Police used surveillance camera footage in the area to track down the suspects. Apparently, it was a “massive manhunt,” according to Thai PBS. A helicopter and drones were used to search for the suspects in the Nakate subdistrict.

A green motorcycle, matching the bike used by the assailants, was found abandoned in the bushes. Police say it was stolen around a month ago from Songkhla’s Thepa district.

Commander of the Pattani Task Force, Komkrit Rattanachaya, adds that the bullet casings from the M16 rifle found at the scene match bullets found at an earlier attack in the Muang district where 4 volunteers were shot and killed.