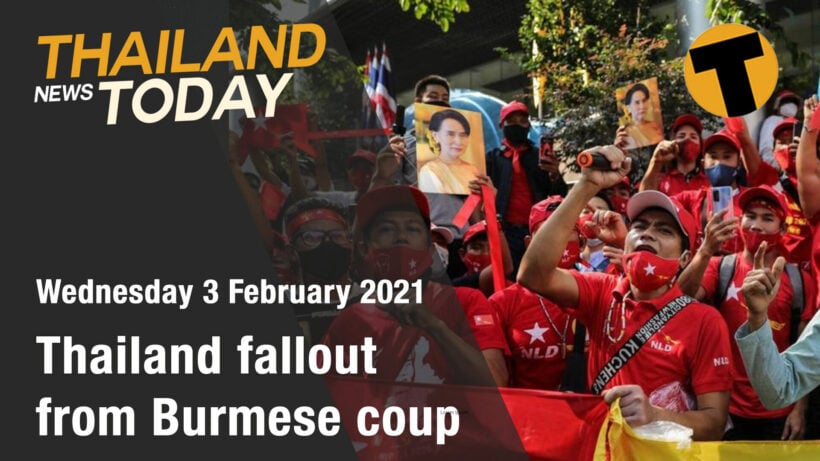 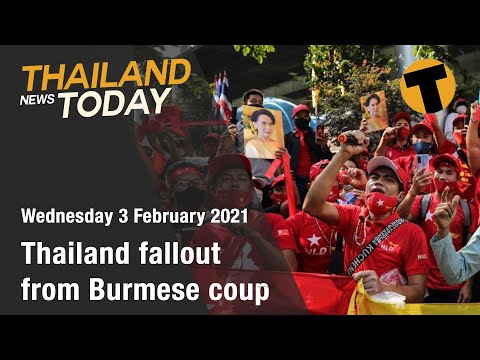 With potential sanctions and boycotts against Myanmar likely following the military coup, the Thai-Myanmar Business Council says Thai investors are concerned their businesses in the neighbouring country will be affected.

As for now, it’s unclear what effect the coup will have on Thai-owned businesses in Myanmar. The country’s economy, already battered by the Covid-19 pandemic, is expected to slow down with foreshadowed sanctions from a number of nations. The US has already threatened sanctions against Myanmar.

A court has rejected a police request to further detain 2 of the 3 activists arrested following a protest at the Burmese embassy in Bangkok on Monday. Thai and Burmese activists gathered to protest the military coup in Myanmar and the detention of several government figures, including State Counsellor Aung San Suu Kyi.

Police arrested 3 suspects in total. Suspects can only be held for up to 48 hours without a court order, so police had submitted a request to detain 2 of the arrested men until February 13. They have been accused of throwing weapons, including smoke grenades, at officers attempting to disperse the protests. Both have also been charged with illegal assembly, provoking unrest, and violating the emergency decree and the Disease Control Act. The third suspect was arrested for using loudspeakers without permission.

The court questioned the 2 men via video link before rejecting the police request to detain them for further questioning.

50 and 60 protesters gathered outside the Burmese embassy last Monday, following the early morning Burmese Army coup, and when officers tried to disperse them, they were attacked with missiles that included smoke bombs, bricks, and rocks. Police report that 14 officers were injured.

Pattaya City has launched the “Welcome Back Pattaya” campaign to lure tourists back to the city as Covid-19 situation keeps improving… much to the relief of the local traders. The campaign aims to attract domestic tourists and is expected to boost the local economy after many businesses in the province were ordered to close last month.

Schools, entertainment venues, gyms, pools among others were allowed to reopen on Monday. Travel restrictions for people entering the province were also lifted.

Health officials in the central province of Samut Sakhon have taken the unprecedented step of sealing off 7 factories, where 40,000 migrant labourers live and work, until at least the end of February. The action is aimed to halt the spread of Covid-19 from the coastal seafood market hotzone. Over 9,000 infections have been found in those 7 factories, which have already been restricted for some time.

Nearly all of the fish markets and factories in Samut Sakhon, which has recorded around 12,000 cases of the virus, have also been sealed off. The public health department says there is little indication that transmission has spread to the wider Samut Sakhon community.

A former assistant manager of a local bank branch in Pattaya is currently under arrest after he allegedly scammed numerous foreigners and Thais into a dodgy investment scheme, using invalid documents to fake transactions.

Around a dozen foreigners have so far filed a complaint with the Pattaya City Police against the bank branch’s former assistant manager Chaisit Sappermphool on fraud charges. At this stage of the investigation the local police say there are millions of baht involved and up to 400 victims in the scam.

The dean of the Faculty of Medicine at Siriraj Hospital is calling on Thai people to have faith in Covid-19 vaccines and cooperate with efforts to halt the spread of the virus. Dr. Prasit Watanapa says Thailand needs to build up herd immunity if the virus is to be suppressed. With over 100 million people now vaccinated worldwide, Prasit used his broadcast to update Thais on results so far.

Police arrested 3 people on drug charges and seized more than 2 million methamphetamine pills in busts in Saraburi and Phetchabun. The suspects were allegedly involved in a major illegal drug operation related to major cases in Bangkok and allegedly smuggled drugs from Laos to the border province Loei. Police say another suspect is on the run.

The suspects allegedly admitted to transporting the drugs, earning 50,000 baht to 70,000 baht each time. Police say they seized 2.1 million methamphetamine pills, a 9mm pistol and a pickup truck, which police say was used to transport the drugs.

795 new Covid-19 infections have been announced over the past 24 hours – 783 local infections and 12 imported – raising Thailand’s total to 21,249 since the start of the outbreak….tripling the country’s total over the past 6 weeks.

Of the 783 local infections, 759 new cases were found in communities of Samut Sakhon province, and 24 others were detected in hospitals.