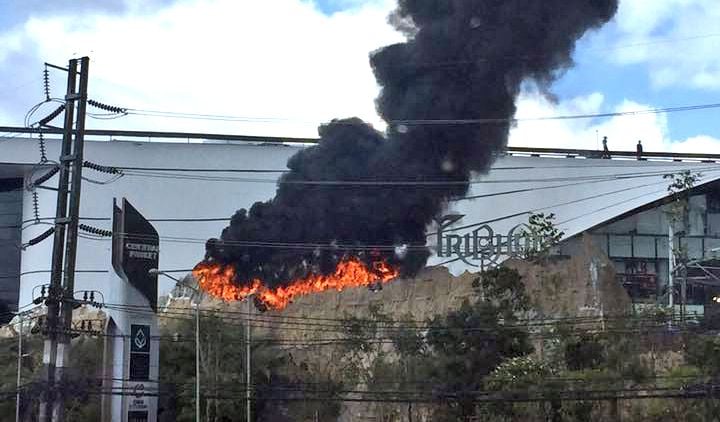 One of Central Floresta’s new themed feature attractions has been totally guttered today in a dramatic fire that started just after opening time this morning.

The ‘Tribhum’ attraction, a walk-thru theme park, scheduled to open before the end of the year, burnt fiercely as the outer skin of the ‘volcano’ caught fire and kept burning until it was all gone.

Fire crews and emergency responders rushed to the new shopping centre where shoppers where evacuated to safety. At no time, however, were any shoppers in danger. Luckily the amusement hadn’t opened and there were no guests using the facility at the time.

The ‘volcano’ was a feature at the Darasamuth intersection and has had it’s plastic ‘skin’ totally destroyed. All that’s left is the bare scaffolding where the plastic moldings were attached.

The cause of the fire has not yet been determined.

The new Central Floresta has had a serious fire start in the past half hour in the unfinished new 'Volcano' amusement area. Staff evacuated from the building. The fire destroyed the yet-to-open 'Tribhum' amusement park. Fire and emergency services on the scene. More news as it comes to hand. Thanks to TF for the video.

PHUKETDramatic video from inside the Central Floresta shopping centre this morning as shoppers were evacuate from the centre, shortly after it opened its doors for the day. The 'Tribhum' attraction, featuring the fake volcano. has been completely destroyed with the fake rock skin being completely burnt off. Thanks to KW for the video.