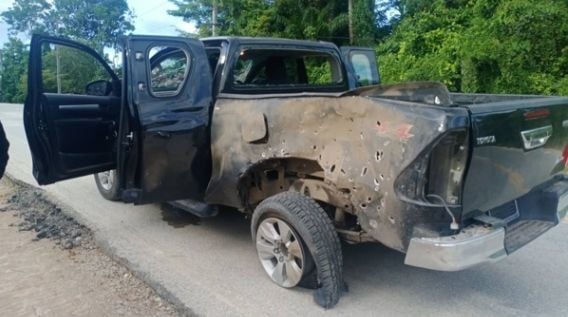 In the southern province of Narathawit, an area troubled by insurgency-related violence right on the Thai-Malaysia border, a bomb exploded as rangers were driving to a wedding. None of the soldiers were injured, but the bomb caused major damage to the pickup truck.

Here’s is a longer explanation of the 2 decade-long southern insurgency.

The bomb was an improvised explosive device, or IED. It was planted along the roadside in the Rueso district by the Sawo Hile village in tambon Sawo.

Civic action team soldiers were on their way to a wedding in the nearby village Bue Cho when the roadside bomb exploded. The bomb damaged the left side of the Toyota pickup truck bed and left rear tyre. An explosive ordnance disposal team was called to the scene.

Alleged drug dealers arrested after help from a stray dog

Hoteliers to discuss how to revive Thailand’s crippled hospitality industry