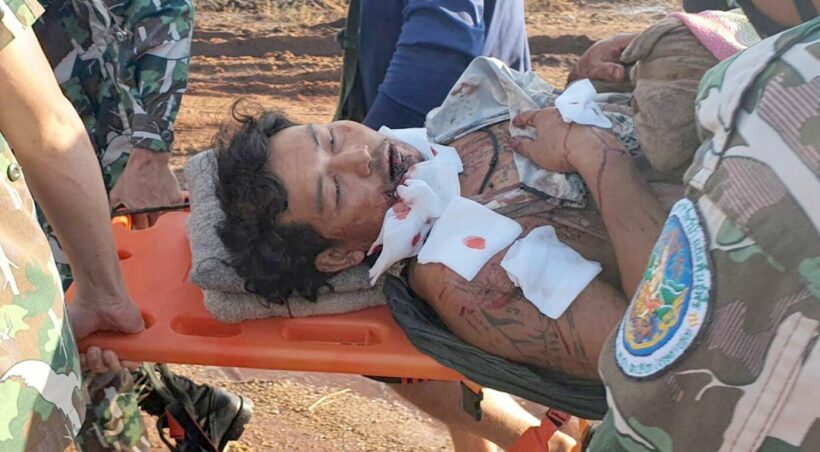 PHOTO: A Karen man was attacked by 3 tigers in Kanchanaburi. (via Piyarat Chongcharoen)

After the horrific story that spurred multiple headlines about poachers killing 2 tigers in Kanchanaburi 2 weeks ago, the tables have turned as a local man barely survived an attack by 3 tigers that took the life of 2 of his dogs. A Karen tribal man was out herding his 9 buffalos as they grazed in the Samathor forest inside Khao Laem National Park in Kanchanaburi when the tigers attacked.

Thi incident took place Friday after the 46 year old man left his village around 9 am and travelled the 4 or 5 kilometres to the park to round up his buffalos. The man was with his 3 dogs when at around noon he saw the 3 tigers barreling down on him. He fled as they attacked and managed to climb a tree as they were mauling him and escape with his life. Two of his dogs weren’t as fortunate however and the tigers killed them.

When the tigers finally ran off, the Karen man climbed down from the tree and rode on one of his buffalos towards his home. He ran into a friend on the way and was helped to the village. The village head was notified and called the authorities. National park rangers then came and transported the injured man to Thong Pha Phum Hospital.

The man is now being treated for about 20 wounds sustained from the tigers, covering his face, neck, arms, legs, and hands, with some of the injuries considered serious. Park authorities have helped with his recovery, giving his wife 10,000 baht to offset his expenses.

About 10 rangers went to check the area for the tigers in hopes of avoiding any more attacks. The forest has been cut off, with locals banned from entering without advance permission and a park ranger escort.

Soldiers of the Karen National Union were said to have warned locals nearby that 5 tigers they had regularly seen in the past had not been around for a while and were believed to have migrated into forested areas of Thailand to hunt for food. The soldiers issued another warning after the 5 poachers killed 2 of the tigers, skinning them and cooking their flesh, that the remaining 3 tigers may attack local residents and their animals.

newman
yeah..what was the motive for the 3 tigers attack...animals dont just attack people for no reason? REVENGE....moving into their territory

Fluke
2 hours ago, newman said: yeah..what was the motive for the 3 tigers attack...animals dont just attack people for no reason? REVENGE....moving into their territory Hungry ? Tigers eat humans for dinner

palooka
I'd be buying lottey tickets before all that good luck runs out.

Fundraiser for survivor, funeral for victim of the attack on 2 British men