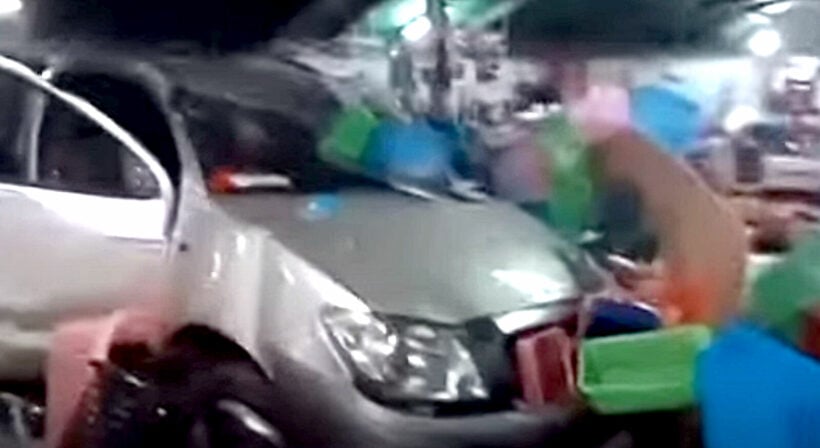 PHOTO: A truck crashed into a Chon Buri grocery store. (via CCTV screencap)

A local grocer met with a rude awakening as he slept in a bedroom in the back of his grocery store in Chon Buri. At 2 am, the owner of a grocery store in Bor Thong was woken by a pickup truck smashing through the front of his shop, nearly into his bedroom behind the store.

Bor Thong Police responded to an emergency call after the accident and headed to the chaotic scene where a pickup truck sat in the middle of a decimated grocery store. The crash was recorded by the shop’s multiple CCTVs which captured a truck careening through an intersection, seemingly without any braking or attempt to slow down before smashing through a tree, some motorbikes, and the wall of the grocery store.

The truck had broken a tree in front of the shop completely in half when it was ploughed into, and the pickup smashed 2 motorbikes sitting in its destructive path as well. Despite such a trail of destruction, including the shop building and merchandise inside, the owner, when interviewed, estimated damages to his property were only about 45,000 baht so far.

The 41 year old owner said he had been asleep in a small bedroom in the back of the grocery store he runs when he was woken up by a loud crashing sound. He ran out of his bedroom and was met by the pickup truck in the centre of his store. It had crashed through with such force that it had nearly crossed the whole shop and into his bedroom where he was asleep.

While the reason the truck veered from the road and into the grocery store is currently unclear, the shop owner said that the driver of the pickup truck promised to take responsibility and pay for all the damage to his business after recovering from his own injuries. He was taken to the hospital for treatment for what was described as several moderate injuries from the crash.

Bluesofa
4 minutes ago, palooka said: Don't be offended if I cross the road when I see you, nothing personal. 555555 OK, but just make sure you look both ways before crossing.

billywillyjones
Maybe he thought it was a drive thru.
kmc
On 11/19/2021 at 4:05 PM, Bluesofa said: It's like any nationality, it depends on the honesty of the person you're dealing with. My experience with Thais: I've been the victim of a hit and run, left for dead. I've also…

Bluesofa
25 minutes ago, kmc said: Perhaps you should just stick with songthaews...lmao. If they only had them where I live. I'd have to walk three or four kilometres to find one.
HiuMak
23 hours ago, Bluesofa said: OK, but just make sure you look both ways before crossing. also look up and down🤣