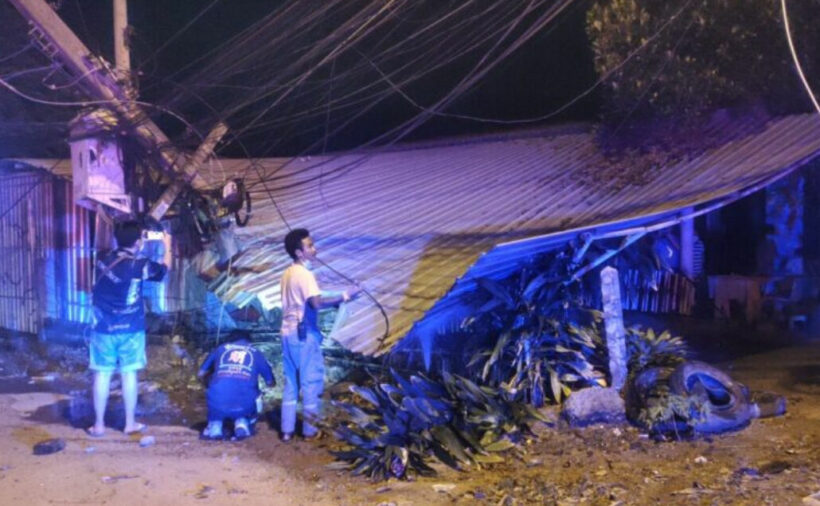 PHOTO: A Bang Lamung car crash wakes a family as a truck plowed into their house. (via Pattaya News)

A family in Bang Lamung got a rude awakening when a pickup truck lost control and smashed through the front of their house late last night. The crash happened around midnight during curfew hours for Chon Buri, and fortunately, the children and adults inside the house had already gone to bed when the accident occurred.

The crash involved a grey pickup truck with a Bangkok license plate and a driver and one passenger inside. The truck apparently lost control and ploughed through two electric poles and then crashed through the front of the house. The 44 year old owner of the house reported that nobody inside was hurt, while the 35 year old driver and his 18 year old passenger only suffered slight injuries from the crash.

The driver admitted he had been drinking and said he was also rushing to get home since he was out after curfew hours. He said he lost control suddenly and hit an electric pole before careening into the house. Nong Prue police and rescue volunteers arrived at the scene of the accident and police administered a blood alcohol test, though the results were not made public.

The driver was taken into custody and will face prosecution for the accident, possibly because of his inebriation. He will likely be held liable financially for the damage caused.

The accident knocked down 2 electric poles in front of the house and the crash caused the roof of the house to collapse where it did damage to the homeowner’s 2 cars. Torn electrical cables jutting out from the wreckage and a shattered pipe dumping water onto the road nearby indicated that a significant amount of repairs will be needed.

AdvocatusDiaboli
27 minutes ago, Thaiger said: a driver and one passenger Party time!

DoUKnowWhoIAm
If you live close to a road in Thailand, you'd better have a wall thick as a German ww2 bunker to resist those flying pickup trucks.

JamesE
"I want to die peacefully in my sleep like Grandpa and not screaming in terror like the passengers in his car."

Fire breaks out at Pattaya nightclub, millions of baht in damage estimated