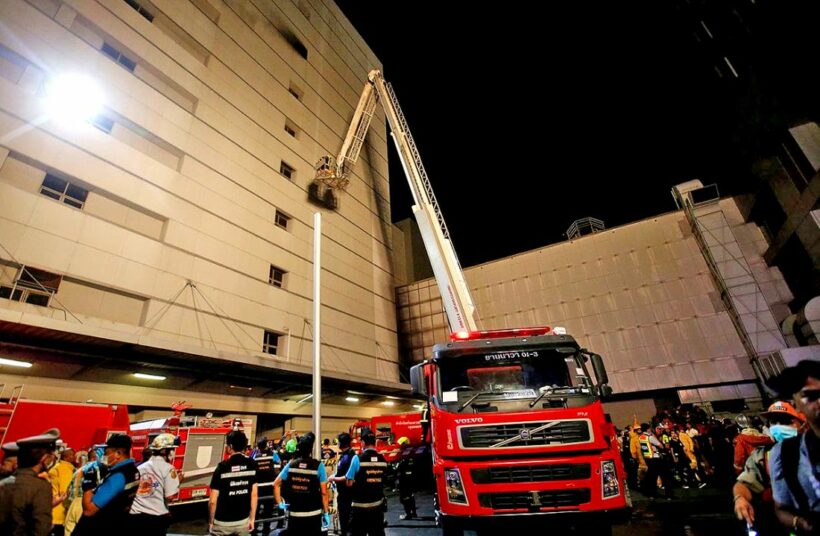 The Erawan Medical Centre has confirmed that two people were killed and another 20 injured in last evening’s fire at Centara Grand Hotel and CentralWorld Shopping Centre at Bangkok’s Ratchaprasong Intersection.

One person was found dead at the scene (a staff member who jumped out of a fourth storey window), whilst the other fatality, identified as 50 year old Arthit Khamsai, was pronounced dead at Chulalongkorn Hospital.

Among the 20 victims who suffered injuries mostly from smoke inhalation, six were male and 14 were female. Six were later released, while 14 remain in three hospitals – Police General Hospital, Chulalongkorn Hospital and Phayathai Hospital.

The shopping mall also issued a notice saying that they expect to open today at 2pm.

Central Pattana (Owners of Central World and Centara Grand Hotel), in another press statement issued today, responded to comments that fire alarms did not ring during the incident. The company says that the mall applied a sectional alarm system. This is intended to prevent unnecessary panic if all the mall’s alarms are ringing at the same time, and could lead to accidents during evacuation.

On the day of the fire, the alarm at B2 floor and eighth floor rang, the company said, adding that the mall has smoke detection devices and evacuation situation assessment in place.

US Embassy responds to Don’s rebuke over Thanathorn case