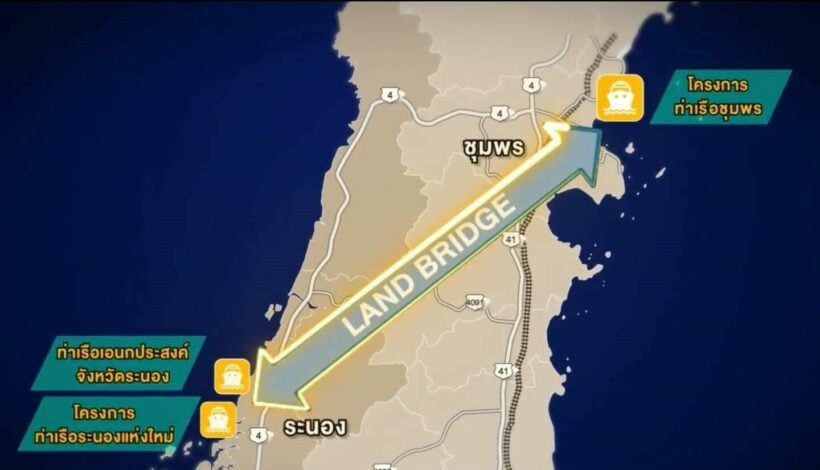 Thailand’s Transport Minister says the location of the much-discussed southern land bridge will be confirmed by June. Saksayam Chidchob says the bridge will provide a more convenient option for shipping goods between the Middle East and the Pacific region. According to a Bangkok Post report, the government is reviewing various locations in the province of Chumphon on the Gulf of Thailand, and in Ranong province on the Andaman Sea, based on their engineering, environmental and economic potential.

The land bridge project replaces the Kra Canal project, which has been dismissed on environmental grounds. It’s hoped the land bridge will provide a more convenient link between the Strait of Hormuz and the Andaman Sea, 4,000 kilometres away. Goods would be shipped to the Andaman province of Ranong, before being transported – via the land bridge – to Chumphon in the Gulf of Thailand. From there, goods can be sent to overseas markets in places like China, Japan, and South Korea.

According to Saksayam, in 2016, the Malacca Strait was used to transport 19 million barrels of crude oil a day, 16 of which were destined for those 3 countries. He says the planned land bridge has the potential to become a new shipping option for cargo travelling between the Indian Ocean and the Pacific, thereby helping the economy in the southern region.

“This future transport and cargo exchange gateway will bring down transport costs by bypassing heavy traffic in the Malacca Strait. It will attract operators to use it.”

He adds that 24.7 million containers currently cross the Malacca Strait every year, which is why Singapore’s port is the largest petroleum terminal in Asia, boasting the world’s second-highest number of cargo containers.

“As such, southern Thailand has a good potential to become an intercontinental shipment and cargo exchange gateway, given its location being close to Singapore.”