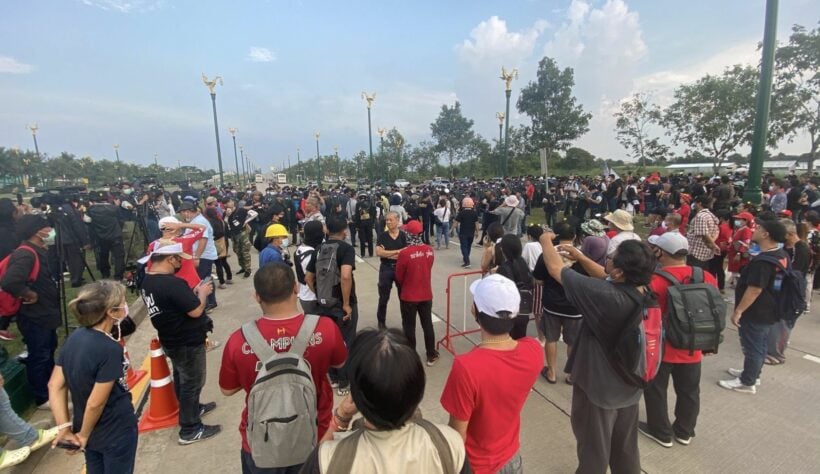 Fit for the end of a 4 day long weekend, the protest road show headed west yesterday, to a far western district of Bangkok in Tawichai Wattana, an hour’s drive from the city centre. It turned into more of a festival than a political rally where up to 2,000 people gathered. A similar rally was held at the same location by then pro-government, pro-Thaksin, red-shirts one month before the May 2014 Army coup.

The deputy commissioner of the Metropolitan Police Bureau says that the Salaya Student group had sought permission from Bang Plad police to hold the rally along the Aksa and Utthayarn Soi 13 roads.

Protesters on the main stage, led by the Ratsadon (People’s Movement) and Salaya Student groups, once repeated their demands for the resignation of Thai PM Prayut Chan-o-cha, changes to the 2017 constitutional and reforms to the role of the Monarchy.

Many of the demonstrators were former members of the United Front for Democracy against Dictatorship displaying coffins to commemorate protesters killed in rallies of the past. But, boosting the atmosphere, were comedians and people in costumes providing hidden anti-establishment digs at the current government and monarchy to avoid ‘crossing the line’.

Police were on hand to guard the nearby Thawi Watthana Palace demanding protesters stay at least 150 metres away. A second protest was held back in the main city from midday until 7pm near the Democracy Monument, by a smaller pro-democracy group.

Pro-democracy protester organisers have already announced another rally this Wednesday in front of the Crown Property Bureau building, the quasi-government agency responsible for managing the property of the Thai Monarch.