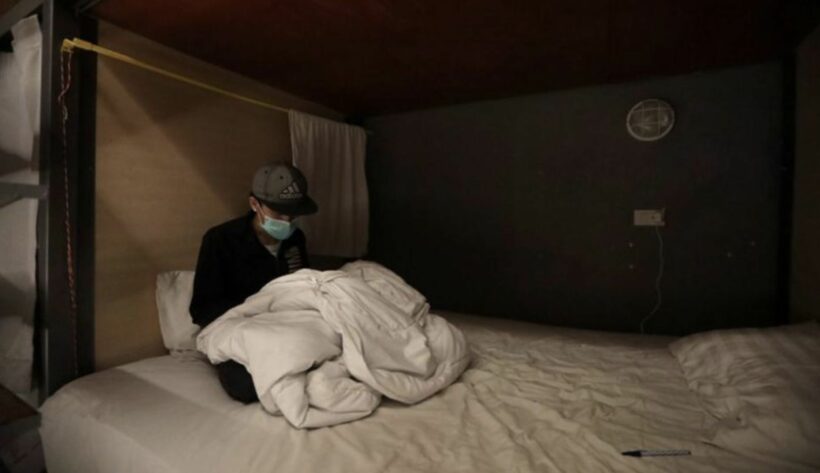 PHOTO: A protester is happy to have a clean and safe place to rest between rallies - usnews.com

Some Bangkok hostels are opening their doors, and offering beds and accommodation to demonstrators, providing them free refuge, or at very low prices. Young protesters have travelled to Bangkok to be a part of the growing protest movement that is putting pressure on the PM and government to listen to, and accede, to their demands.

More information about their demands and the protest movement HERE.

The protesters have defied crackdowns and even a formal State of Emergency, declared to allow arrests and police intervention, to call for on Thai PM Prayut Chan-o-cha to resign. The protest movement is also demanding reforms to the role of the Thai monarch, and want the revised role to be codified in a new constitution.

Some of the protesters, with no other options, have been sleeping in the city’s parks or simply sleeping on the street, determined to stay in the capital and continue the demonstrations with their peers. Many others are being accommodated by friends and families. Now some of the city’s empty hostels are offering to take them in to rest in between what has become almost daily protests (over the last 9 days).

One hostel owner said that they had almost no visitors staying with them over the last month and felt it was “their duty” to take in the young Thais and provide a clean, safe place for them to stay. Whilst asking not to be identified, he said that they have plenty of spare beds at the moment.

“This isn’t a political thing for us. We are all Thais and should help each other. These young people needed refuge and we are glad to help them”.

Now there’s a Twitter account, Mobmeeteenon (Translated: protesters have places to sleep), that links protesters to available rooms after the protest schedule ramped up in recent weeks and, for now, looks to continue, despite the Government calling an emergency session of Parliament next Monday and Tuesday.

The Twitter account is now offering more rooms than the number of protesters looking for refuge as Bangkok hospitality owners make space available.

Some protesters, speaking on the condition of anonymity, are saying that they’ve been living in the same place for more than a week now and call their temporary accommodation “home” whilst visiting Bangkok to take part in the protests.

Despite being “well funded” now, the protest movement doesn’t provide any money for the protesters. The protest movement is receiving donations from other Thai people and from overseas. Just last week some 4 million baht flooded in from K-Pop enthusiasts, and more is expected as their ‘idols’ are speaking out in support of the current Thai protest movement.

“We’ve had a dribble of real travellers over the past 3 months so it’s nice to see our beds being used again. They are all helping each other and want to see this through to the end.”

Some 500 people have been hosted in Bangkok hostels since the effort to provide rooms started.

On Wednesday night the Thai PM addressed the nation on TV and promised to revoke the State of Emergency in return for the protesters “standing down”. His conciliatory tone was matched by an official rescinding of the emergency decree yesterday morning.

Protesters, for their part, have called off further protest action until Sunday night. They say they expect the resignation of the PM “by Sunday night” or they will continue their protests again. The Thai Parliament has been called for an emergency session to discuss the protester demands and the current impasse next Monday and Tuesday.