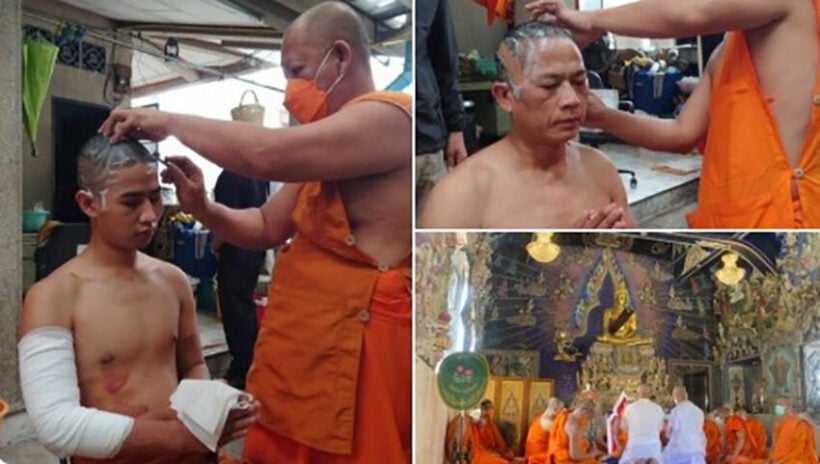 A police officer who hit a woman with his Ducati bike as she was on a zebra crossing has been ordained as a monk. According to a Bangkok Post report, 21-year-old Narawich Buadok chose to enter the monkhood to make merit for the killing of Dr Waraluck Supawatjariyakul last Friday afternoon. The Bangkok ophthalmologist was mown down as she was using a zebra crossing on Phaya Thai Road in the Ratchathewi district of the capital.

Narawich has had 7 charges filed against him in relation to the incident, including a charge of reckless driving causing death. He entered the monkhood at Bangkok’s Pariwat Ratchasongkram temple yesterday afternoon. He was accompanied by his father, Nikom, a police officer from Pathumwan station, who was also ordained. Narawich has stated that his intention in entering the monkhood is to make merit for the death of Dr Waraluck.

The Bangkok Post reports that the victim’s family continued to mourn her as funeral proceedings entered the second day at Phra Si Mahathat Wora Maha Viharn temple in the Bang Khen district of Bangkok. She would have been 34 on Monday. According to her father, Dr Anirut Supawatjariyakul, his daughter liked his cooking and the family have made a birthday cake for her. He also said he would not criticise the officer for entering the monkhood, instead saying he would thank him for making merit for his victim.

“The police will work on the case, and there should not be any deviation from their procedures. Let us finish the ceremony. I don’t want to comment on my faith in the Thai justice system at this time.”