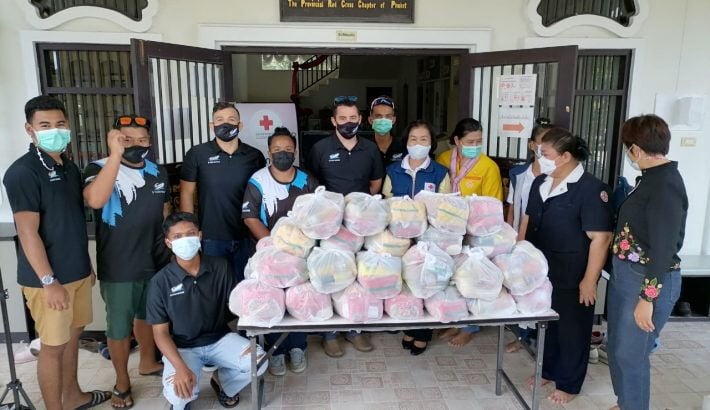 This morning the Thai public health department has added a further 20,571 infections to the Covid totals. 235 of today’s infections are from Thai prisons. There’s also been 261 new deaths announced from the past 24 hours. 23,159 patients have been released from hospitals and field hospitals in the past 24 hours as well.
Here are today’s provincial totals… 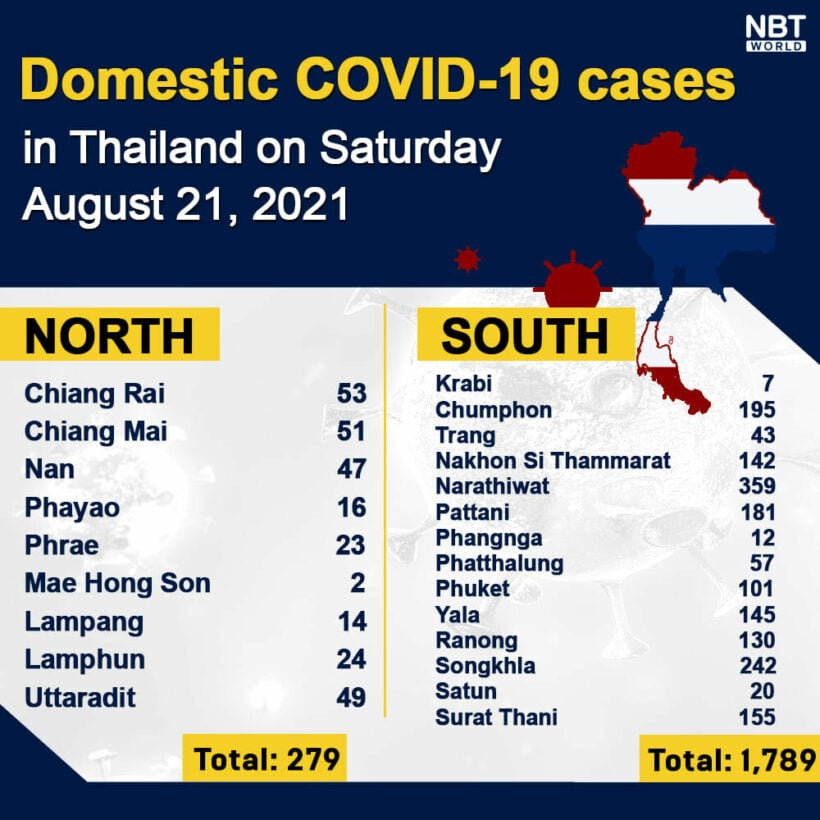 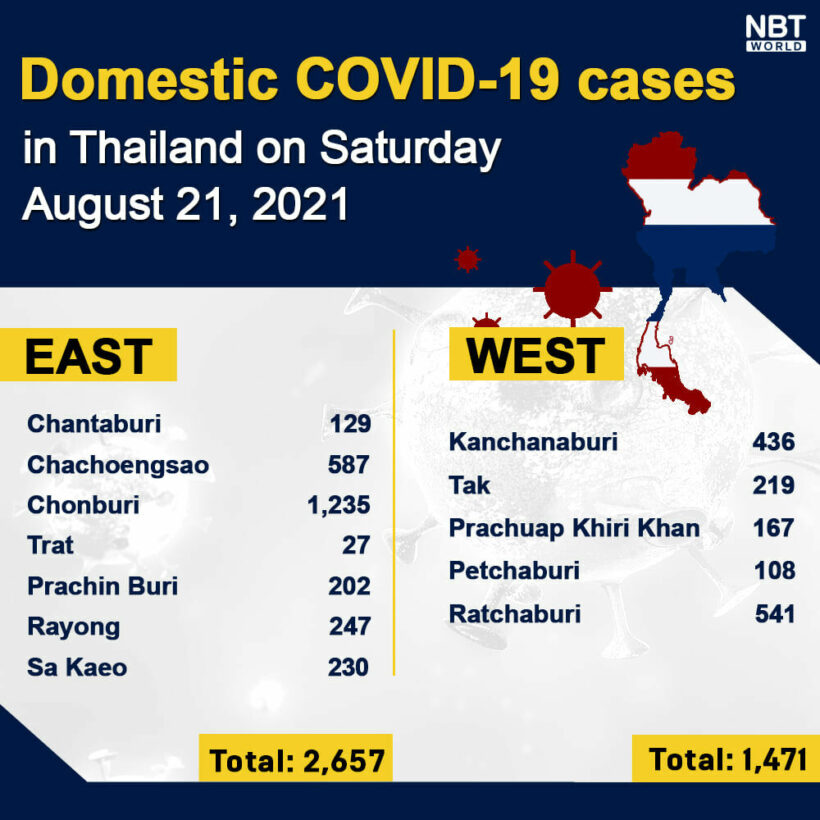 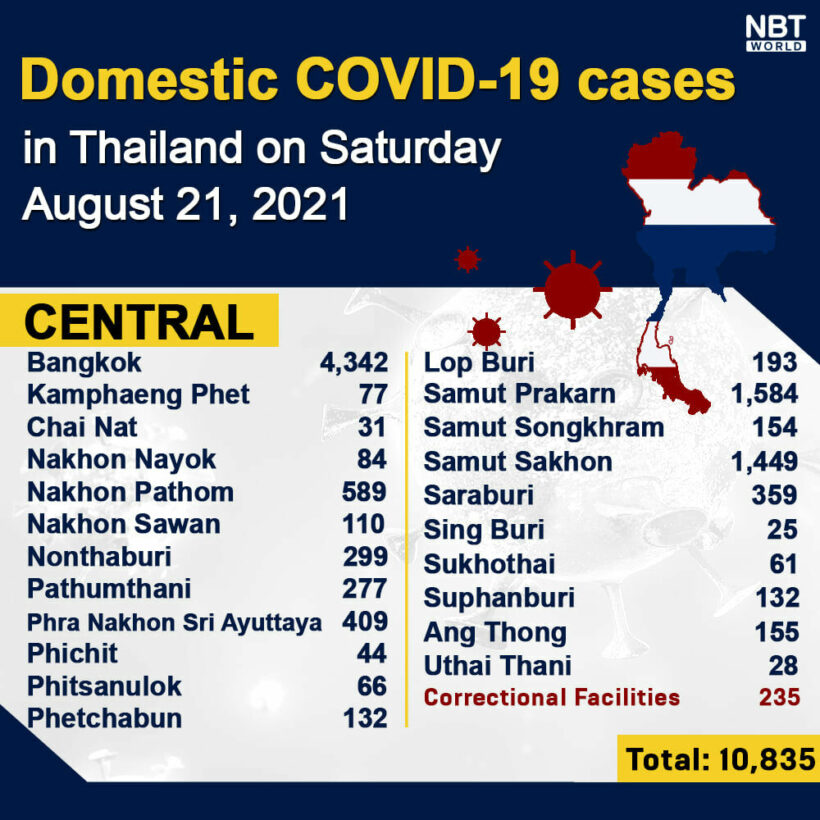 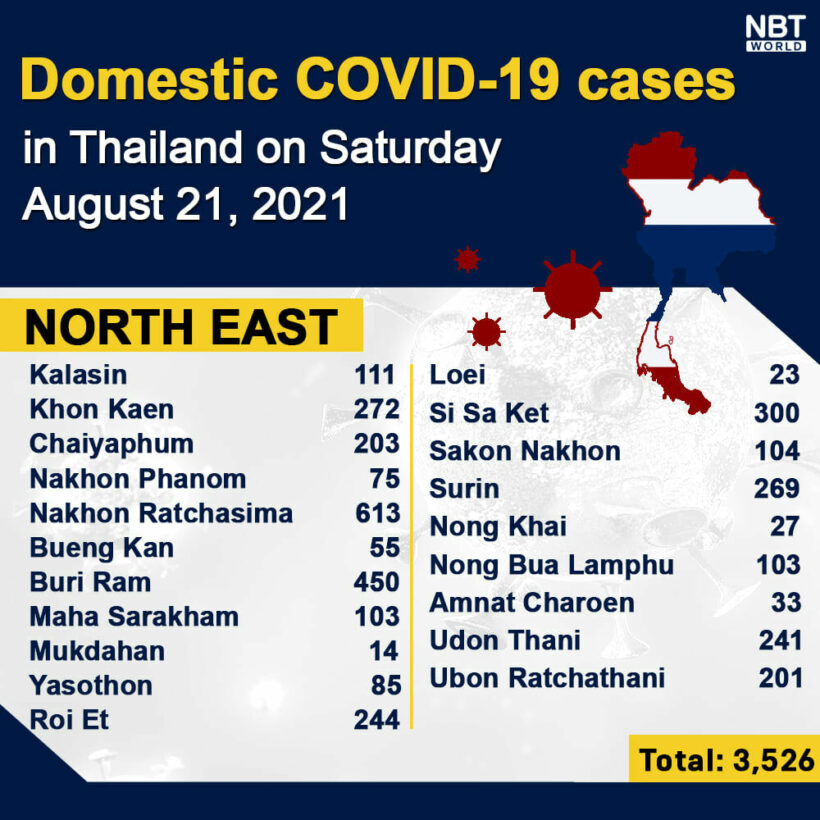 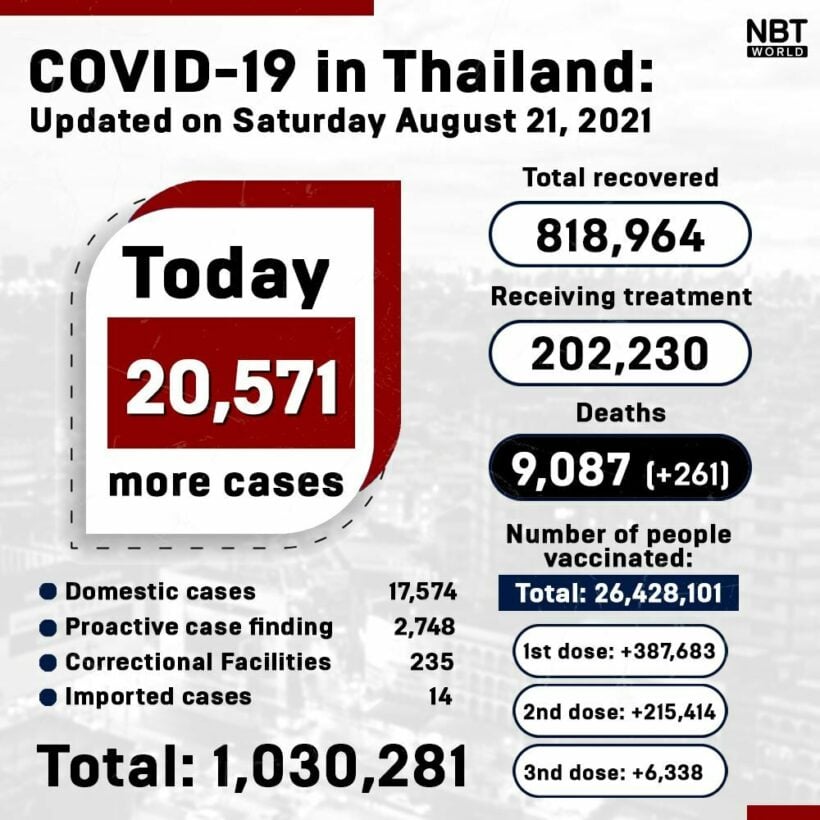 • Thailand’s Surat Thani province will continue the “Samui Plus” program to attract vaccinated foreign tourists, with Bangkok Airways set to resume flights between Phuket and Samui Island on August 25.

257 fully inoculated foreign tourists had traveled to Samui, after spending 2 weeks in Phuket under the “sandbox” scheme. However, flights between Phuket and Samut had been suspended from August 3 – 16, which has now been extended until August 31. This means no tourists will arrive from “sandboxed” Phuket.

He said that, after concerted lobbying, flights on the Phuket-Samui route would resume earlier. Bangkok Airways is scheduling flights between the two islands on August 25, 27 and 30. This will boost the number of tourists arriving under the “Samui Plus” scheme, which encompasses Koh Samui, Koh Phan Ngan and Koh Tao.

The governor said, from August 15th to November, 168 fully-vaccinated tourists had already made bookings on Samui, with reservations for 2,149 hotel nights, an average of 12.7 nights per visitor. The reservations were made by French, German, British, Austrian, American and Thai tourists, according to the NBT.

• The Tourism Authority of Thailand says Chiang Mai may have to wait to kick off its tourism reopening program, from next month until at least October, due to concerns over vaccination of the local population.

The TAT deputy governor Thanet Phetsuwan said the province’s “Charming Chiang Mai” tourism program (read “Chiang Mai Sandbox”) may need to be postponed because 70% of its population have not yet been vaccinated – a basic requirement from the government before tourist regions can re-open.

“TAT officials will meet Chiang Mai provincial governor Charoenrit Sanguansat on Tuesday to ask him to complete the rest of the plan at a later date, to be proposed by the CCSA.”

Chiang Mai’s tourism reopening program will not be the same as Phuket’s or Koh Samui’s plans, which have allowed visitors to arrange their routes freely. Chiang Mai plans to reopen for tourism through the use of tour companies, with 9 types of travel packages for 4 days and 3 nights, to ensure routes are under control.

• Travel bubbles in the news… again. This time, Thailand plans to launch a travel bubble arrangement with South Korea once the Covid-19 situation improves. The Tourism Authority of Thailand says the plan would allow for quarantine-free travel between the 2 countries, with hopes it will provide Thailand with a much-needed tourism boost.

The plan has been confirmed by the TAT’s Thanet Petchsuwan, who will oversee international marketing for the Asia and South Pacific regions from October.

He said…. “My first mission will be to talk to the new Chinese ambassador to Thailand about the possibility of allowing Chinese citizens to travel abroad. We are also preparing talks with South Korea to launch a tourist-exchange program, or travel bubble, without the need for quarantine. We are considering the timing and procedures for the program’s launch once the Covid-19 situation in Thailand unwinds.”

TAT offices in the region are hell-bent on promoting the Kingdom to vaccinated Asian travellers, as tourists participating in Phuket’s sandbox scheme and the Samui Plus re-opening have been primarily from Europe and the US.

• The Tourism Authority of Thailand has announced a marketing plan focusing on Asian territories with lower infection rates, such as China, Hong Kong and Taiwan.

TAT offices across the region have been tasked with promoting Thailand as a holiday destination to vaccinated Asian tourists.

The governor said he will talk to the new Chinese ambassador to Thailand about the possibility of allowing Chinese citizens to travel abroad. The agency is considering the timing and procedures for the program’s launch, once the Covid-19 situation in Thailand improves.

In addition, the TAT will ask other regional countries, such as Singapore, to help reduce the expense of 14 day quarantine for its nationals returning from Thailand.

Ronaldus
6 hours ago, Bob20 said: You clearly have no understanding of science. You are entitled to your opinion, same as people who think the earth is flat. But if you get your "news" from brandnewtube and rumble etc. and view…
vlad
23 hours ago, Ronaldus said: So how many people in thailand committed suicide. Because they lost everything. And vaccinated people still get covid. The numbers will go down. Lockdowns or not Yes Ronaldus it will get better but when ?
vlad
11 hours ago, Ronaldus said: Freedom back? 1 you still can get covid 2 you still can give covid to someone else. 3 masks don't work. 4 hope this vaccine don't kill you.  Ronaldus whats your point ? We know…

Ronaldus
29 minutes ago, vlad said: Yes Ronaldus it will get better but when ? When people stop testing for covid.
Manu
1 hour ago, vlad said: Ronaldus whats your point ? We know fully Vaxed can still transmit and receive it from an infected person its not news, What your failing to say is your not likely to be hospitalized because…