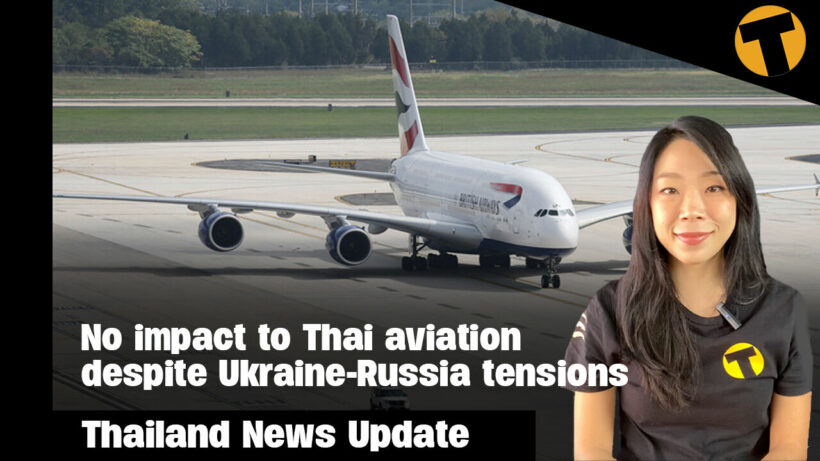 Recognising the current situation in Ukraine and the early phases of Russian aggression in the former Soviet state. Whilst there is no direct impact on Thailand as of right now we don’t have anything specific to report.Although the US and UK governments have already banned flights from the Russian national airline Aeroflot, planes are still arriving from Moscow to Thailand today. Another airline flying out of Siberia, S7 Airlines, also landed and departed from Phuket in the past 12 hours. We will advise as soon as the flight situation out of Russia changes. All flights in and out of Ukraine have been suspended and air traffic is now closed across the country.

The Tourism Authority of Thailand announced late yesterday the current tensions between Russia and the Ukraine WONT affect the Thailand-UK flight route since the route doesn’t go through either Russia or the Ukraine. TAT’s governor said its London office will monitor the situation closely and contact airlines and travel agencies if needed. He said TAT will announce immediately if Russia-Ukraine tensions ever affect the route. The TAT governor added that Etihad Airways UK, Qatar Airways, and Singapore Airlines also confirmed the tensions won’t affect their Thailand-UK routes. The Ukraine has closed airports in the region and airspace over the former Soviet state…and is now listed as an exclusion zone for international aircraft.

The Public Health Ministry is setting its sights on declaring the spread of the coronavirus disease as endemic within the next four months. The permanent secretary for public health says the fatality rate in the current Omicron wave is significantly lower than during the previous outbreak.He said that, even though lung infections are on the rise, these numbers are also proportionally lower relative to previous caseloads. The Public Health Ministry spokesman รุ่งเรือง กิตผาติ reiterated that the fatalities were 10 times lower in the latest Omicron wave, and studies suggested they will be slashed in half again if 60 to 70 percent of elderly people get a third booster vaccination.

Malaysian PM Ismail Sabri Yakob visited Thailand yesterday to conduct his first visit as Malaysia’s prime minister.He’s meeting with his Thai counterpart, PM Prayut Chan-o-cha, to discuss bilateral cooperation, vaccines, and the reopening of the countries’ shared border.Focus areas of discussion include economic cooperation, post-Covid cooperation, reopening Thailand’s shared southern border, and key connectivity projects crossing the many land borders. The Thai-Malaysia border is home to a long-running separatist insurgency that’s resulted in the deaths of over 7 thousand people. Thai officials are expected to raise the issue of recent rebel attacks in the southern Thailand region. Malaysia has been brokering peace talks between Thailand and the Malay-Muslim rebels.Malaysian PM’s trip to Bangkok follows a 2 day visit to Cambodia, where he participated in official meetings with the long-serving Cambodian PM Hun Sen.

A number of locals in the southern province of Trang say provincial authorities have skimped on the aid packages for those in home isolation while they recover from Covid-19. During the 10-day mandatory time in self-quarantine, the residents say authorities have only been giving them instant noodles, canned fish, and rice… not the three meals a day they say they were promised by local health officials. Those infected with Covid-19 in Thailand are required to report their infection to the government and undergo a quarantine period at a field hospital or at home, depending on their symptoms.But in Trang’s ห้วยยอด district, a number Covid-19 clusters among families were reported and they were encouraged to quarantine at home. Leaving the house during the quarantine period is prohibited and local health officials have been responsible for providing three meals per day along with medicine and thermometers. But locals say they didn’t received the meals as promised.Since those infected with the virus couldn’t leave the house to visited the market, neighbours helped stock up food for some of the families. But reports say some families had to stop working while they recovered and couldn’t afford to buy food, relying on the government for support. The governor has responded saying that he had not received any complaints about the lack of food or quality of the aid packages before.

Next month’s Pattaya Music Festival 2022 has, sadly, been postponed due to the surge in Covid-19 cases which hit 1 thousand 2 hundred and 50 new infections in Chon Buri yesterday. With the recent decision to hold off the music festival, some are worried authorities may also yet again cancel April’s Songkran festival, the traditional water celebration for the Thai New Year. Pattaya Music Festival was planned to take place every weekend throughout March. The locations and artist lineup were already confirmed, but the festival is now postponed due to the increasing number of Covid-19 cases in Chon Buri, which includes Pattaya.An official announcement says the event is postponed until further notice and updated information on the event will be announced once the Covid-19 situation improves.According to the National Security Council Office, people should be allowed to travel across provinces and live life pretty close to normal this Songkran. But they’re predicting that parties and water events might not be allowed. Officials are still mulling over possible measures and whether to cancel the water fights.Songkran happens in and around April 13 each year.

A woman was arrested for smoking methamphetamine in a laundromat in Pattaya on Wednesday evening. The woman allegedly told fellow washers she “loved ice” and invited attending police to join her in smoking it, saying it would give them more energy. Witneeses say she seemed to be smoking the illicit drug “blatantly” in public, and not at all trying to hide it. Another laundromat user shocked by the woman called the police again just before midnight. Police took the woman to Pattaya City Police Station to take further legal steps.Pattaya City Police say the woman is around 40 years old, and didn’t have any documentation on her. They also said she didn’t appear to have brought any laundry to the laundromat. The police said the woman appeared to be “heavily under the influence” of drugs, and didn’t make sense when she talked to them. The woman allegedly said she bought the meth from a “friend”, but then claimed not to know this friend’s name or how to contact them.Using methamphetamine in Thailand can earn people up to three years in prison, or a fine from 10 thousand to 60 thousand baht.

Whilst we’re on drugs, Thailand’s Customs Department has seized 1.28 kilograms of cocaine from a man at a quarantine facility who had just entered the country from Guinea Bissau. Authorities suspect the man may have swallowed the “balloon packaged drugs” as a way to get passed security at the airport. The 41 year old man from Sierra Leone arrived at Bangkok’s Suvarnabhumi Airport on February 12. He was already under the radar of Thai authorities and the Customs Department was notified of his arrival. Officers at the arrival gate searched his bags, but didn’t find any illegal drugs. Officers then continued to monitor the man and went to the quarantine hotel he was staying at when he was checking out on Tuesday. Officers searched his bags and found 74 small packs of cocaine hidden in his backpack. They say the drugs have a street value of 3.8 million baht.