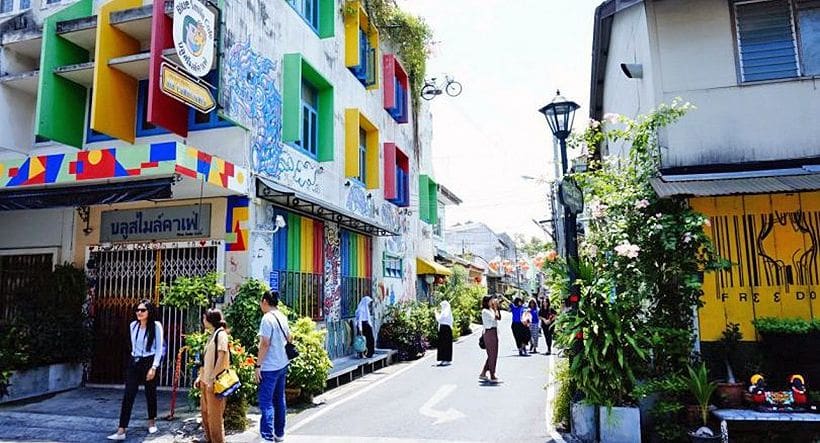 As we come in for landing at Hat Yai International Airport, I see clear sky reflected in the azure waters of the Gulf of Thailand. Despite the weather App warnings, the sun was out.

Sightseeing is first on the agenda though and after a pleasant 40-minute drive from the airport to Songkhla Old Town, I find myself seated in a classic Singora Tram travelling back almost 500 years to the days when this southern city was a major trading port for sea merchants from Portugal, Holland and China. Perched on the east shore of the Isthmus of Kra, this area is famous for its unique local cuisine, beautiful architecture, striking street art and chic hostels.

At the corner of Nakhon Nok Road, the 105 year old Hub Hoe Hin rice mill has been transformed into the headquarters of the Songkhla Heritage Club and showcases the exhibitions of its founders and of the town. It was opened in 1914 by Ministerial Marshall Khun Rajagitgaree (Junliang Lim-saowapreuk) and was used as a Japanese medical storage facility during World War II. Later, the Lim-saowapreuk family closed the mill and shifted their business to a small ice factory and to exporting para-rubber.

In 1982, this site was converted into a pier for small fishing boats and is now in the capable hands of Rangsi, an engineer and a third generation member of the family. Singora Tram Tour takes visitors to explore the Songkhla Old Town and the beaches.

“Formerly known as Singora, Songkhla boasts the ruins of archaic towering city walls, fortresses and sanctuaries, testaments to the unique multicultural communities where Muslims, Thai and Chinese have been living together for several centuries.

Four years ago, Rangsi returned to his hometown and set up the Songkhla Heritage Society Club to promote cultural tourism,” says Professor Seubsakul Srisuk, a member of the club.

“We teamed up with artists and local residents to create street art to draw the attention of tourists. Our aim is to have Songkhla join Malacca and Penang on the Unesco list of World Heritage Sites.” 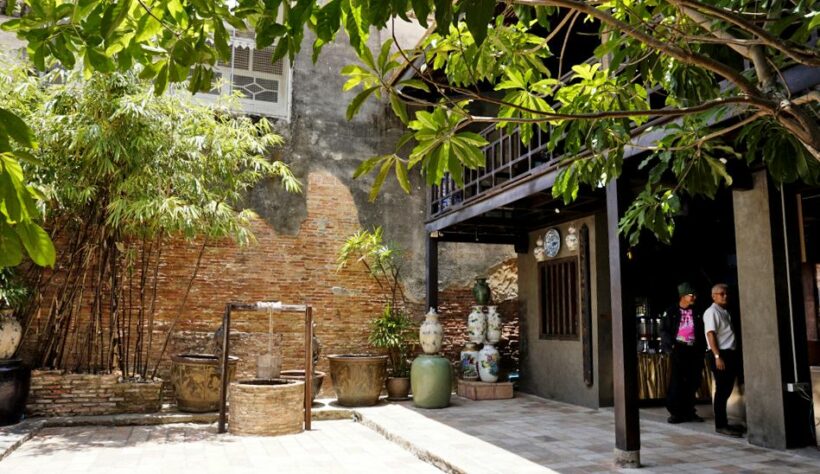 A short walk from the mill is the Apothecary of Singora. This 150 year old Chinese-Hokkian-style house has undergone a modern overhaul but retained its old structure. Herbal inhalants jostle for space with handicrafts created by local residents, all of them for sale.

The tram driver rings the bell as the vehicle turns right into Nakhon Nai Road, which is home to attractive Sino-Portuguese and Sino-European buildings, similar to the ones on Phuket’s Thalang Road and Bangkok’s Charoen Krung’s Road.Baan Nakhon Nai promotes itself as a community museum. “In terms of location, Songkhla can be divided into three periods – Ban Pha Daeng, Ban Laem on the Sathing Phra Peninsula and Bo Yang – dating back more than 300 years.

The Old Town has long been a business district for Chinese residents and the merchant traders from Holland, Portugal and Malayu,” a local guide says. Mostly built in the reign of King Rama V, Nakhon Nai Road is home to Baan Nakhon Nai, a luxury residential compound that’s been turned into a community museum and boutique hotel.

Featuring a two-storey Chinese-style wooden house and a four-floor Sino-European building, it presents a large collection of black-and-white photographs and sculptures of His Majesty the late King Bhumibol Adulyadej that trace his life and works throughout his 70 years on the throne. Rare editions of ancient Chinese-style wood beds, wooden furniture and elegant ceramic ware are on view in the museum and the hotel offers six well-designed guestrooms.

A little further on, Nang Ngam Road’s shophouses, teahouses and Thai bakeries make it a popular dining venue for both locals and visitors. The 81 year old Kiat Fang eatery specialises in making oversize buns and Songkhla-style hot stew with pork, liver and offal cooked in coconut milk and herbs. The classic teahouse called Hub Seng serves dumplings and a breakfast set with tea and coffee though most people seem to be tucking into home-made kaya toasts.

The Mae Chawee Dessert House is famous for sticky rice stuffed with shredded pork and egg yolk and Ice Cream Oang is a hit with kids and adults alike with its wide variety of toppings and the ice cream served in a lovely painted jar. In the narrow alleys of Yala, Pattani and Raman Roads, colourful street art covers the walls of many old residences and portrays the daily life of Muslim fishermen and the Thai-Chinese cuisine scene including a Thai sweet house and Chinese noodle pushcart.An iconic mermaid status has sat on the rock for 52 years.

The tram trundles on to Chana Road and deposits our group at Songkhla Phra Thammarong Museum, the former residence of former prime minister and respected statesman General Prem Tinsulanonda, who was born in Songkhla. Established in1987, it’s a traditional Southern-style Panya-style wood house with a trapezoidal roof to resist against storms. Inside visitors admire the family antiques and learn about his early life.

The tram tour ends at the nine kilometre stretch of four beaches – Kao Seng, Chalaphat, Samila and Laem Suan On, where an iconic mermaid status has sat on the rock for 52 years. Students are forming a long queue to take selfies with her and some tourists touch her breast following a local belief that those groping a mermaid’s breast will meet their soul mate in Songkhla or get a chance to come back here.

Khao Kho Hong offers the striking views of the Hat Yai landscapes.I look longingly at the beach but before long we are in a van heading back towards Hat Yai to climb up the peak of Khao Kho Hong, where a towering Buddha status stands. This is the best viewpoint to admire the sunset and views of Hat Yai landscapes, though our attention is somewhat distracted by a villager putting on an adorable bird show. 6 ways to avoid being defrauded in a property investment