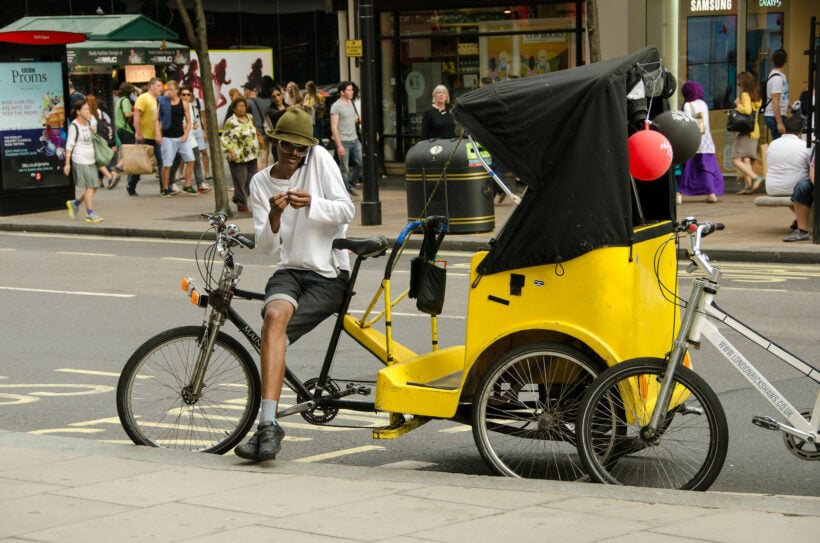 A pedicab driver rolls a cigarette as he waits for passengers on Oxford Street in London. Credit: Kamyar Adl | Flickr

A pedicab driver in London who swindled two female passengers out of 180 pounds has been forced to return the money, after the Westminster City Council requested a crackdown on the city’s bicycle rickshaw “nuisance.”

The driver originally charged 18 pounds for a 3 minutes trip, but then increased the price by a factor of 10 at the last minute, adding a zero at the end, the women reported.

For expats in Thailand, it sounds like a page cut from the Thailand tuk tuk playbook.

Fortunately, local police tracked down the driver and made him return the ill-gotten cash during a weekend crackdown that lasted from the Saturday evening into the early hours of Sunday morning.

Heather Acton, a communities and regeneration cabinet member, said it was time for the government to take action and ensure pedicab drivers would take safety checks and pay road tax in the West End, which is beginning to recover from a year and a half of pandemic related disruptions and restrictions.

“Pedicab operators are an unlicensed nuisance that have plagued the West End for years, preying on tourists and annoying local residents.

“There is little regulation around them and they are uninsured — there are serious safety concerns around them.”

Police moved some 70 pedicabs — or bicycle rickshaws — found blocking pavements, while nine others were reported for blasting loud music from their speakers, deemed “likely to be an annoyance, under the Control of Pollution Act 1974.

An additional four pedicab drivers played music softly, despite carrying big speakers, as they peddled gingerly along the lamplit streets of the West End.

The story sounds all too familiar to Bangkok locals and longtime expats in Thailand, who are accustomed to seeing colorful tuk tuks on the roadside, especially along popular walking streets and metro stations at night.

Tuk tuk drivers in the Big Mango are notorious for disobeying traffic rules and cheating tourists, either by charging exorbitant prices, or for tricking them into common scams.

Chaimai
3 hours ago, HiuMak said: Shame to a first world country Shame to the scammer, nothing to do with the country........quite possibly east European. Don't confuse the endemic corruption of a country like Thailand with a country…
HolyCowCm
He certainly looks like he was born in the UK and has a long family ancestry history there.

Transam
20 hours ago, steve860 said: Should round them all up and crush their rickshaws, unfortunately London looks like a Third World country, they call it Cultural enrichment! ☹ No, it's called tourism...🤑

Transam
The "service" is open to scammers, if there are no meters. I queued up for a taxi in KL, wanted to go to the KL Tower, I could actually see it, probably a mile away, got in the taxi, told…

steve860
38 minutes ago, HolyCowCm said: He certainly looks like he was born in the UK and has a long family ancestry history there. So you think that's the guy in the picture rolling a fag is the scammer?