“Where are you going?”, they shout from across the road. A Tuk Tuk driver wants to help you get to your next destination but the willing smile and lure of a ride in a local jalopy may have switched off your trusty scam-detector.

Tuk Tuks and taxis, and the motorbike taxis too, are a convenient, safe and reasonably cheap way to get around Bangkok and other provinces in Thailand (except Phuket where the taxis and tuk tuks are run by a local cabal and are hideously over-priced). Most of the drivers are good, honest Thais making a living. But there are a few who will ‘take you for a ride’ and not necessarily the destination you had in mind.

The best policy is to have some knowledge and know what to do in advance, before you even get in.

A casually dressed, English-speaking Thai man starts talking to you. In a friendly, conversational way you are asked “Where are you going”? On his handy chart are some local tourist recommendations – a temple, a shrine, a waterfall, a market, a view-point. The asking price is low and before you know it you’re heading for some locally recommended tourist haunt instead of where you wanted to go.

Along the way there are recommendations to drop into other markets, silk factories, shops, restaurants and gem stores. Here the prices are expensive and the ride to get back to your accommodation or original destination is now much higher.

This is a classic scam played out daily in various parts of the country. It all seems innocent enough and, hey, you’re here for an adventure. But the commissions along the way leave you out of pocket and probably too polite to say much about it. And you’re in a foreign country and don’t want to turn down a local’s friendly offer, right?

A tuk tuk or taxi ride anywhere for a really low price should be a red flag. Best to ask your hotel reception about the local going rate for a taxi or tuk tuk before you venture out for the day. Be firm but polite if you feel you need to decline their offers. If the cheap fare their offering is too good to be true, it probably is.

Getting a ‘Scenic Tour’ or going to the Wrong Destination

A lot of your travails, if you happen to come across any problems with tuk tuk and taxi drivers, will likely come down to ‘misunderstandings’. Most public transport providers around Bangkok, and most of the tourist hot spots, will speak enough English, or maybe a bit of Chinese and Russian, for you to be able to explain where you want to go.

If you just babble your desired location and assume your driver completely understood you, you’re probably wrong. Check that they know where you want to go, show them a photo, get your hotel concierge to explain it, show them the map on your smartphone. Get an acknowledgement to be sure.

A problem you may encounter is the ‘long route’ to wherever you’re going. If you insist on a metered journey this is more likely to happen. The driver can just sit in a traffic jam earning money at your expense. If you negotiate a fixed fee for the journey, before you get in, this is unlikely to happen and, from a business point of view, the driver will be keen to get you where you’re going and find the next fare.

You’re a tourist in a foreign country. It’s probably difficult to know if you are heading in the right direction or going by the best and fastest route. Technology can really help in these situations. In Thailand you can get a local sim card at the airport or local convenience stores. They will require a copy of your passport front page for local ID, but it’s well worth being able to use all the latest Apps and maps on your phone to keep a track of where you are. Internet in Thailand is very reliable and cheap.

By the way, if you do get into any difficulties call the Tourist Place, anywhere in Thailand, on 1155.

The Case of the Malfunctioning Meter

By law, all taxis are required to charge you by the meter. In reality that rarely happens though in Bangkok officials are really ramping up spot inspections to make sure they do. In Phuket, it will likely NEVER happen. From the airports in Bangkok you will have no problem getting a metered taxi although there’s plenty of touts hanging around the arrival area, especially at Suvarnabhumi, who will try and intercept you before you find the proper metered taxi booth.

But it’s not all bad having to negotiate a set fee for your journey although a bit of homework beforehand will put you in a stronger position to negotiate a price. Negotiate means ‘negotiate’. Try for a lower fare, with a smile, and settle for something reasonable. It’s not a battle to the death and dragging it out and accusing them of being ‘rip offs’ is not going to help.

“Meter no work” is a common phrase you’ll encounter. You will have two options – politely thank them for the information and walk away or negotiate a set fee. If you really have no idea of an approximation of the fare then find a taxi with a working meter or ask a local for help.

There are also turbo-charged meters where the meter has been ‘fiddled’ to click over at a faster rate. If you suspect you’ve been scammed by a turbo charged meter take some photos of the meter and the taxi and contact the Tourist Police – 1155.

Usually, but not always, you’ll get a better rate on the meter. So push for the driver using the meter, especially if it’s sitting there on their dashboard! Believe us, the meter works.

• Grab Car (and Grab Bike) is a great alternative, especially in Bangkok, Pattaya, Chiang Mai and Hua Hin (and plenty of other popular locations these days). Not so much in Phuket where the Grab Car fees are about the same as the local, artificially high taxi rates. The ‘disruptive’ taxi technology puts safety, ease-of-use, fairness and transparency back in the hands of the user, instead of the taxi driver.

• In Bangkok Grab Car is usually cheaper than local taxis and a lot easier to use. Same with Grab Bike when compared to the local ‘Win’ motorbike taxi drivers.

• In Phuket push for the taxi driver to use their meter but realise this may be a losing battle. Sometimes a pre-arranged pick-up will avoid problems but will probably end up costing you more. Tuk Tuks (red Diahatsu vans) only operate in the tourist areas and don’t have meters – you’ll need to negotiate every time.

• In Chiang Mai there’s the red baht buses, more like a small truck with space in the back for passengers. Know where you are going and be careful that you know the fee before you get in. Grab is popular in the northern city and taxis are usually quite reliable.

• In Pattaya the baht buses travel around all the well-trodden tourist areas and are very cheap and reliable. Taxis in Pattaya will often have ‘problems’ with their meters so be ready to haggle for a reasonable price. 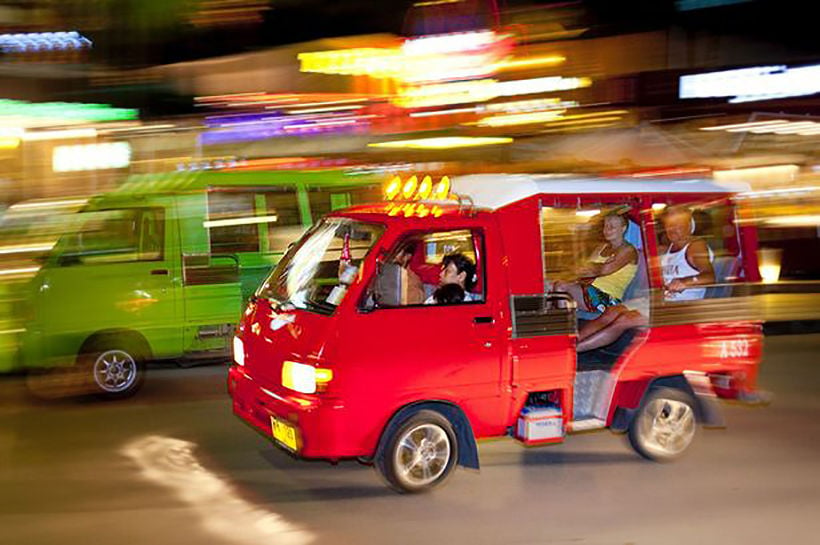