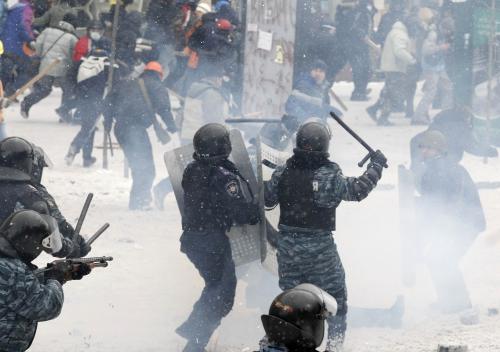 
Ukraine braces for street battles after Yanukovich talks fail
Reuters / Phuket Gazette
PHUKET: Ukrainian opposition leaders emerged from crisis talks with President Viktor Yanukovich on Wednesday saying he had failed to give concrete answers to their demands, and told their supporters on the streets to prepare for a police offensive.

Using emotional language following the deaths earlier in the day of at least three protesters – two of them from gunshot wounds – the three opposition leaders who met Yanukovich said they were ready to face police bullets.

Boxer-turned-politician Vitaly Klitschko told the thousands of protesters gathered on Kiev’s Independence Square that during three hours of talks the president had given no clear response to their demands that the government be dismissed and sweeping anti-protest laws ditched.

“Today they (the police) are preparing to clear us out of the ‘Maidan’ (Independence Square),” Klitschko declared.

“We must do all we can to stop them clearing us out,” he said.

He urged people to stay overnight and defend the square in central Kiev, and drew a roar of support from protesters when he declared: “If I have to go (on to the streets) under bullets, I shall go there under bullets.

“Tomorrow if the President does not respond … then we will go on the offensive,” he said.

Former economy minister Arseny Yatsenyuk echoed his words, and referred to the overnight shooting deaths which the opposition has blamed on police despite official denials. A third man died after plunging from the top of Dynamo football stadium while fighting with police.

“I will not live in shame. Tomorrow we will go forward together. If there will be a bullet in the forehead, so be it. It will be honest, just and brave action,” he said.

The deaths were the first protest-related fatalities since the crisis erupted last November after Yanukovich ditched a trade deal with the European Union in favour of financial aid from Soviet-era overlord Russia to prop up Ukraine’s ailing economy.

The direct talks between Yanukovich and the opposition were the first concrete move towards negotiating an end to two months of civil unrest which have culminated in violent clashes between hard-core radical protesters and police.

The protesters, inflamed by news of the deaths, faced off again on Wednesday with riot police, whom they have battled near the government headquarters since Sunday night.

Though repelled by occasional forays of baton-wielding riot police, they have continued to return to the spot, setting tyres ablaze and sending clouds of black smoke wafting into police lines.

Fifty people were detained overnight and 29 of them were officially charged with taking part in mass unrest, police said. A total of 167 police have been injured, officials said. There was no estimate of the number of civilians injured.

Ahead of the talks with Klitschko, Yatsenyuk and far-right nationalist Oleh Tyahnibok, Yanukovich issued a statement deploring the overnight loss of life.

Urging people not to heed the calls of “political radicals”, Yanukovich said: “I am against bloodshed, against the use of force, against inciting enmity and violence.”

But his prime minister, Mykola Azarov, took a tough public line before flying off to the economic forum in Davos, denouncing the protesters as “terrorists” and “criminals”.

He blamed opposition leaders for inciting “criminal action” by backing the protests, which he said had destabilised Ukraine, a country of 46 million people.

The Kiev demonstrations turned more violent on Sunday after harsher police tactics and the introduction of sweeping anti-protest legislation which the opposition says paves the way for a police state in the former Soviet republic.

Though hundreds of people have continued to protest peacefully in an encampment on Independence Square, a smaller group of hardcore radicals effectively hijacked the movement by attacking police with petrol bombs, fireworks and cobblestones. Police responded with rubber bullets, stun grenades and tear gas.

Underlining Washington’s disapproval of the way Ukraine has handled the protests, the U.S. Embassy in Kiev said it had revoked the visas of several Ukrainians linked to police violence against the demonstrators in November and December.

It did not name the officials, but said it was considering further action.

A State Department spokeswoman, Marie Harf, said the United States strongly condemned the violence, as well as “the targeted attacks against journalists and peaceful protesters”.

Harf blamed tensions on the government’s anti-democratic measures but also said the extreme-rightist group Pravy Sektor was inflaming the situation.

“We urge all sides to immediately de-escalate the situation and refrain from violence,” she said in a statement.

The European Union called on Ukraine’s government and opposition to “engage in a genuine dialogue”.

“I strongly condemn the violent escalation of events in Kiev overnight leading to casualties. The reported deaths of several protesters are a source of extreme worry,” EU foreign policy chief Catherine Ashton said in a statement.

Russia has told European governments to stop meddling in Ukraine’s political crisis and said events could be spinning out of control.