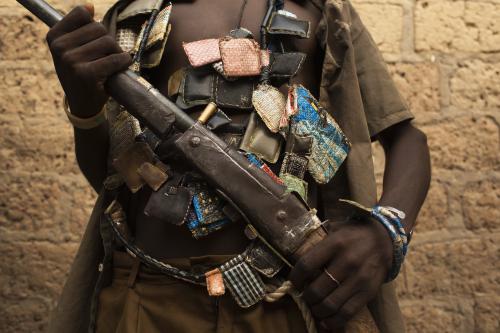 More than half the landlocked state’s 4.6 million people need assistance and nearly one million have fled their homes after mostly Muslim Seleka rebels seized power in a March coup d’etat that ousted former President Francois Bozize.

Christian self-defence groups known as “anti-balaka” (anti-machete) have taken up arms against them, and the United Nations estimates that retaliatory violence has claimed thousands of lives.

“The impact of the conflict on children has been dramatic with unprecedented levels of brutality,” the U.N. envoy for children and armed conflict, Leila Zerrougui, told the U.N. Security Council. “Children have been directly attacked, maimed, killed and beheaded.”

She said recent estimates showed that as many as 6,000 children could be associated with armed groups. “They have been manipulated by both sides and divided along religious lines,” Zerrougui said.

told the council he was shocked by the level of hatred between the Christians and Muslims.

“The widespread, unchecked nature of attacks by ex-Seleka and anti-Balaka militia, as well as by armed civilians associated with them, against civilians on the basis of religion or ethnicity constitute crimes against humanity,” he said. “If not halted, there is a risk of genocide.”

Dieng visited Central African Republic in December with Zerrougui and a representative of the U.N. envoy on sexual violence in conflict, Zainab Bangura.

He said reports had indicated that the anti-Balaka militia were becoming more organized and now included some former soldiers sympathetic to Bozize. “These former soldiers have reportedly played a leadership role in organizing attacks against Muslim civilians,” he said.

Dieng said people who had been interviewed in the capital Bangui, who said they were anti-Balaka members, reported that the Christian militia groups had been deployed to all 16 provinces across the country to mobilize Christians against Muslims.

In December, the Security Council authorized French and African troops to use force to protect civilians in the former French colony, imposed an arms embargo, and asked the United Nations to prepare for a possible peacekeeping mission.

The arrival of a 1,600-strong French military mission and another 5,000 African Union peacekeepers has so far failed to stop the fighting. This week the European Union said it would send 500 troops to support them. The U.N. Security Council is expected to authorize the European troops next week.

U.N. Secretary-General Ban Ki-moon is due to report to the Security Council next month on options for the likely transformation of the African operation into a U.N. peacekeeping force within six months.

Some western diplomats and U.N. officials said the African Union wanted at least a year to control the situation in Central African Republic before handing over to the world body, but they doubted that the African troops were up to the job.

Seven people died in inter-religious attacks and reprisal killings in Bangui on Wednesday and the Red Cross said it had found an additional 11 corpses, most burnt beyond recognition, dumped in the capital.

U.N. sexual violence in conflict envoy Bangura told the Security Council that between January and November 2013 the United Nations had recorded at least 4,350 cases of sexual violence by armed men, largely believed to be Seleka.

She said the extreme animosity between the Muslims and Christians, who previously lived together, married each other and worked side by side, was new and “clearly this could have been prevented.”

“The participation of children in the commission of these atrocious crimes may signify the ‘point of no return’, beyond which the cohabitation of certain communities may be impossible in the near future,” Bangura said.

“There should be no doubt that the violence in the Central African Republic will stain the conscience of its people and the world forever,” she said.

U.N. chief Ban announced on Wednesday the members of a commission of inquiry to investigate human rights abuses since January 1, 2013 in Central African Republic. The members are Jorge Castaneda of Mexico, Fatimata M’Baye of Mauritania and Bernard Acho Muna of Cameroon, who will chair the commission.