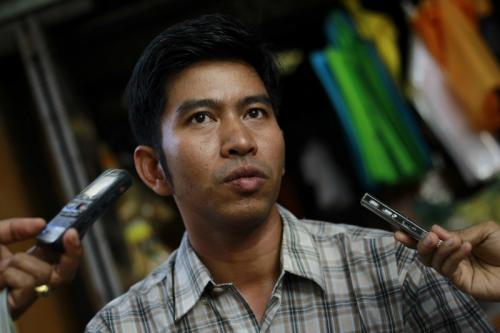 
Myanmar frees 56 political prisoners one day after sanctions dropped
Reuters/ Phuket Gazette
PHUKET: Myanmar’s president announced an amnesty on Tuesday for about 100 prisoners, a senior official said, 56 of whom were confirmed as political detainees by a group monitoring activists held in the country’s jails.

The release is the latest in a series of amnesties decided by reformist President Thein Sein and came a day after the European Union lifted all sanctions on Myanmar excluding an arms embargo.

Bo Kyi, of the Assistance Association for Political Prisoners (AAPP), told Reuters the group had confirmed the release of 56 political prisoners from five jails. According to AAPP, 176 remain in detention.

More than 800 political prisoners were freed in amnesties between May 2011 and November 2012.

Previous releases of prisoners of conscience, as they are often known, coincided with reviews of Western sanctions or high-level visits, such as that by Thein Sein to Washington last September and U.S. President Barack Obama’s landmark trip to Myanmar two months later.

“At key international moments the government releases a few political prisoners instead of releasing them all immediately,” said Mark Farmaner, director of Burma Campaign UK.

“Almost all the laws used to put the political prisoners in jail are still in place.”

The EU’s decision to lift sanctions was criticised by rights groups for ignoring Myanmar’s continuing human rights abuses, including the imprisonment of political activists and the persecution of Rohingya Muslims in western Myanmar’s Rakhine State.

Human Rights Watch released a report the same day sanctions were lifted accusing state authorities of the ethnic cleansing of Rohingya Muslims after violence broke out in June and October last year, leaving at least 125,000 people displaced and 211 people dead.

FBI officials briefed members of Congress behind closed doors in Washington about the investigation into the April 15 blasts that killed three people and injured 264 others.

Authorities say the ethnic Chechen brothers, who immigrated to the United States a decade ago from the predominantly Muslim region of Dagestan in Russia’s Caucasus, detonated two bombs made from pressure cookers near the finish line of the iconic foot race.

Tamerlan Tsarnaev, 26, was killed in a shootout with police and his younger brother Dzhokhar Tsarnaev, 19, lies wounded in a Boston hospital charged with using weapons of mass destruction.

Investigators have focused on a trip to Dagestan last year by Tamerlan Tsarnaev and whether he became involved with or was influenced by Chechen separatists or Islamist extremists there.

Russian authorities flagged him as a possible Islamist extremist in 2011. The FBI interviewed him in Massachusetts but found no serious reason for alarm. Some lawmakers have questioned if more could have been done at the time.

Senators said after a briefing by FBI Deputy Director Sean Joyce and other officials that there may have been a breakdown in communication that kept authorities from tracking his apparent radicalization.

Senator Saxby Chambliss of Georgia, the ranking Republican on the Senate intelligence committee, said the briefing raised questions about the flow of information among law enforcement and intelligence agencies.

“I think there has been some stonewalls, and some stovepipes reconstructed, that were probably unintentional, but we’ve got to review that issue again, and make sure there is the free flow of information,” he said.

The senators said there was tough questioning during the briefing.

“We had a full discussion back and forth over the process that’s followed, and we need to keep at that, and we need to see if there are any loopholes in it, and that we fix those loopholes,” said Democratic Senator Dianne Feinstein of California, who chairs the committee.

Lawmakers said they were unable to confirm an NBC report that the Tsarnaev brothers had been motivated by the U.S. wars in Afghanistan and Iraq or speculation that they had used fireworks to provide the explosives used in their bombs.

The wife of the dead bombing suspect is assisting authorities and in absolute shock that her husband and brother-in-law were accused of the deadly blasts, her lawyer said.

“She cries a lot,” attorney Amato DeLuca said of Katherine Russell, 24, an American-born convert to Islam who married Tamerlan Tsarnaev in June 2010. “She can’t go anywhere. She can’t work.”

People interviewed by Reuters described Tamerlan Tsarnaev as proud but angry, never quite achieving his own idea of the American dream, and instead finding solace in a radical form of Islam adopted by fighters in his homeland.

The sisters of the bombing suspects said they too did not know what had happened to their brothers.

Ailina Tsarnaev, who lives in West New York, New Jersey, and her sister Bella issued a statement through their attorneys expressing their sadness over “such a callous act.”

“As a family we are absolutely devastated by the sense of loss and sorrow this has caused,” they said. “We don’t have any answers but we look forward to a thorough investigation and hope to learn more.”

Dzhokhar Tsarnaev’s condition improved to “fair” from “serious” on Tuesday as he recovered from gunshot wounds at Beth Israel Deaconess Medical Centre, where in an impromptu hearing on Monday he was charged with two crimes that could result in the death penalty if he were convicted.

Since recovering enough to communicate by nodding his head and writing, the younger Tsarnaev has told authorities he and his brother acted alone, learned to build the bombs over the Internet and were motivated by a desire to defend Islam because of “the U.S. wars in Iraq and Afghanistan,” NBC News reported.

NBC cited an unnamed U.S. counterterrorism source who has received multiple briefings on the investigation. Reuters could not confirm the information.

Tsarnaev was captured on Friday night following a massive, daylong manhunt that shut down greater Boston.

The family of 8-year-old Martin Richard, the youngest person to die in the attacks, privately buried their son on Tuesday.

“This has been the most difficult week of our lives and we appreciate that our friends and family have given us space to grieve and heal,” parents Denise and Bill Richard said in a statement. “We laid our son Martin to rest, and he is now at peace.”