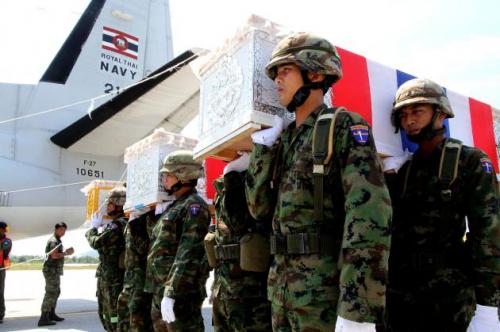 PHUKET: Insurgent bombs should be defused or dismantled at the site instead of being done at military ordnance labs, a senior Army explosives expert said yesterday.
He was referring to an explosion on Monday, which killed three Navy personnel and wounded six others at a barracks in Narathiwat.

Colonel Somkhuan Khongying said the explosion at Marines Task Force 32 in Bacho district could have resulted from electrical sparks set off as officers were defusing the bomb, not necessarily a hidden explosive as widely speculated.

Some 500 people attended the bathing rite at a Narathiwat temple yesterday for the three Marines killed while inspecting the “disarmed” explosive. The Army and related agencies also initially provided one million baht in assistance along with the “Bang Rachan” medal to the deceased Marines’ families.

Meanwhile, Malaysian army officers manned 10 temporary checkpoints on the Kolok River opposite Narathiwat to allow only Malaysians to pass, in a bid to prevent attacks during the national election, due on May 5, from insurgents opposed to peace talks which Malaysia has brokered.