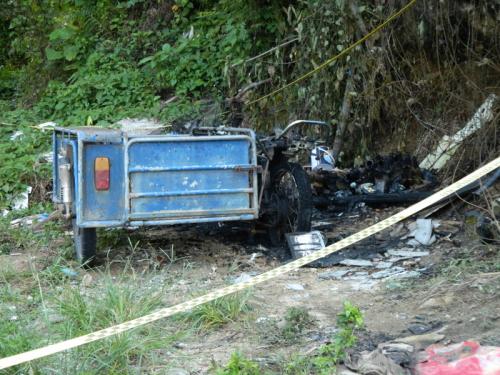 PHUKET: Two more motorbikes and the front of a small restaurant went up in flames in Phuket yesterday, bringing the total number of motorbikes scorched by arson since the beginning of March to nearly 30, say police.

At 2pm yesterday, Kamala Police received three reports of fires: two were of motorbikes ablaze and the third was of flames at the front of a small restaurant.

The first motorbike had a sidecar and was parked beside the Kamala-Patong road. The motorbike was completely destroyed, but the sidecar suffered minimal damage.

The second motorbike was parked opposite the construction site where the owner of the motorbike works, on the road between Kamala and Laem Singh.

Staff at a nearby hotel noticed the fire and rushed to extinguish it. The front fairings and other plastics were destroyed by the fire, but the rear of the motorbike suffered no damage.

The third fire was at a restaurant near Phuket FantaSea. Local firefighters arrived in time to put out the blaze and save the restaurant. Only the front section of the thatched roof was destroyed.

The three fires attracted the attention of the Phuket Provincial Police, who are conducting a joint investigation into the fires with Kamala Police special investigator Lt Col Nanon Pitakkultorn.

“So far 22 motorbikes have been damaged or destroyed by fire in Kathu alone. This includes the eight motorbikes burned at the Irawadee Ketho housing estate [story here] and the two fires in Kamala yesterday,” Kathu District Chief Weera Kerdsirimongkol said.

To assist police with their attempts to catch the firebugs, Mr Weera has ordered his officers and volunteers to set up a checkpoint at the border of Kamala and Cherng Talay.

“Right now we are working intensely on the case of the eight motorbikes. Police are investigating suspects. We believe that a love affair may be the motivation for this crime,” he added.

“Since the beginning of March, nearly 30 motorbikes have been damaged or destroyed by fire. So far two suspects have been arrested, one in relation to an attack in Kamala and the other over an incident in Karon [story here], but the motorbike fire in Thung Thong [story here] was an accident,” Maj Gen Choti said.

“We are focusing our efforts on investigating the rest of the incidents. The areas we are targeting are Kamala, Patong, Thung Thong and the Cherng Talay border,” he added.

Gen Choti warned that if caught, the perpetrators were likely to face harsh punishment.

“The people who are responsible for these incidents should be aware that the penalty is high – the sentence for arson is up to seven years in prison,” he said.

Later that evening another bike was found burning on the side of Pha Hin Tang Road (story here).

The next day a motorbike was discovered on fire at 3pm along the Kathu-Koh Kaew Road, not far from the Phuket Mining Museum (story here).

On April 9, Patong Police were searching for a gang of teenagers who were seen setting alight four motorbikes early that morning (story here).

Although the Phuket Gazette has so far reported 20 of the motorbikes set on fire, police confirmed there were more reports of motorbike arson attacks that had not been reported by the press.