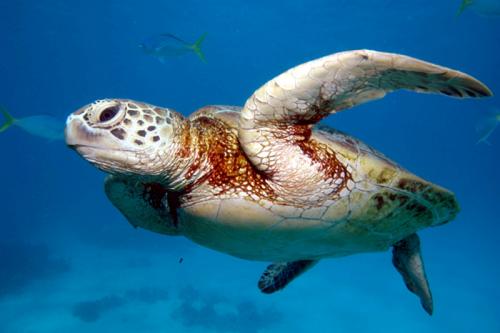 PHUKET: The safety of turtle eggs in a protected nesting ground at the northern tip of Phuket is under investigation by the Mai Khao Marine Turtle Foundation.

The Phuket Gazette contacted the foundation after a reader reported seeing turtle tracks and people probing for eggs in the area between Maikhao Dream Villa Resort and Spa and Maikhao Beach Bungalows (map here) on February 14.

Foundation coordinator Kittipan Sabkhoon checked with security guards and staff at the hotels in the area and said that as of February 28, no suspicious activity had been reported.

Nevertheless, he is sending “guards and our staff to check to see if there are any traces of egg-laying turtles or their nests on the beach,” he said.

“The PMBC worked together with the JW Marriott Phuket Resort & Spa to set up the Mai Khao Marine Turtle Foundation. The aim was for the foundation to take care of the turtles that come ashore to lay their eggs on Mai Khao Beach and to protect those eggs from being stolen by people,” she said.

“During the sea turtle nesting period [November-March], the staff at the foundation rope off the nests to prevent the turtles from being disturbed and to prevent people from stealing the turtle eggs,” she stated.

“People who try to take the eggs will be warned by foundation staff, but if they do it again they will be reported to Sirinath National Park officers and sent to Tah Chat Chai Police Station, where charges will be pressed and they will be fined,” she added.

Ms Patcharaporn asked for the public’s help in preventing poachers. “Please help us to protect the nesting beaches because it is critical to the survival of the sea turtles,” she explained.

Anyone with information about encroachment into the nesting area or theft of turtle eggs is urged to contact the Phuket Marine Biological Center on 076-391128, or the Mai Khao Marine Turtle Foundation on 076-338040.